These English expressions will help you expand your English vocabulary. 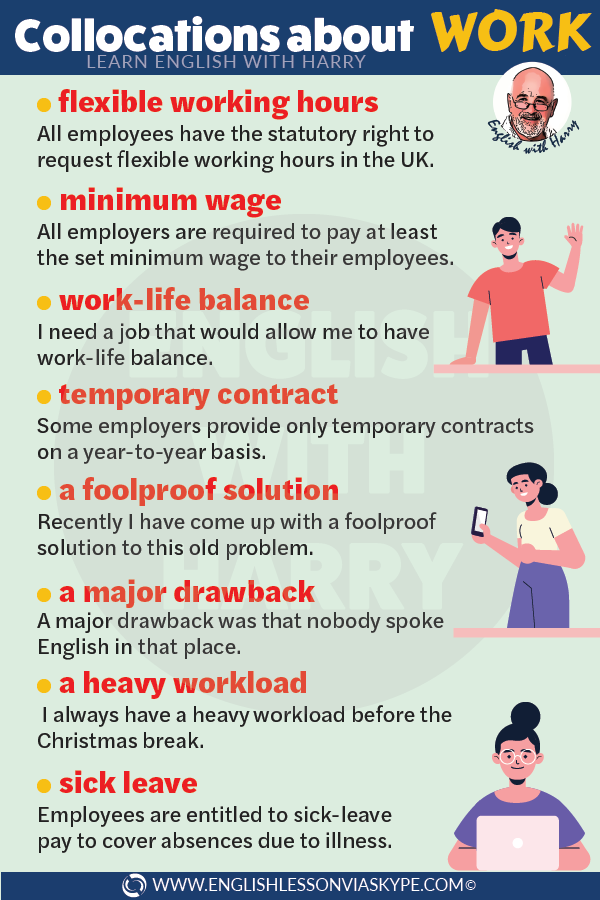 Hi there. This is Harry. And welcome back to a podcast where tried to help you to understand the English language. Okay, so what do I have for you now? Well, in this particular podcast, we’re going to take a look at some English collocations connected with work.

Meaning: there’s flexibility at the beginning and the end of the day so that you can fit it in with your the rest of your life. For example, drop kids to school, attend doctor appointments, etc.

You can start at eight and finish at four or start at nine and finish at five. So as long as you get your eight hours on nine hours, whatever your boss requires, then there’s flexibility. Perhaps you are not an early morning person, and therefore 10 o’clock suits you better. So we all like to enjoy flexible working hours.

The concept of flexible working hours is that it is unnecessary for all employees to begin and end work at the same fixed times.

Meaning: the lowest wage per hour that your employer is legally required to pay you

It could be €8 an hour, €9, €10, depending on which jurisdiction you’re in. They set and established what the minimum wage is going to be. So whatever number of hours you get, it’s multiplied by the amount of the minimum wage, and that is what you can expect to achieve in your weekly or monthly salary.

All employers are required to pay at least the set minimum wage to their employees. 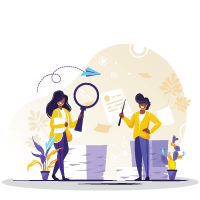 Will help you get your dream job
Get Started 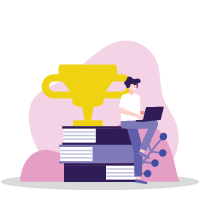 Will help you master English grammar
Get Started 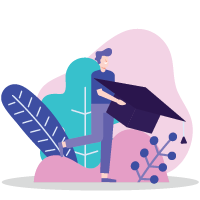 Meaning: getting the right balance in your day in your week between your work and your private life

Of course, this could include now, because of the Internet, getting emails outside of working hours, getting messages from bosses and people, effectively putting pressure on people to work outside the normal working day or working week.

For parents it is vitally important to have good work-life balance.

Meaning: a contract for a temporary period. You start one day and it ends with a definitive end date in three weeks.

Some employers provide only temporary contracts on a year-to-year basis.

Meaning: a solution that can’t go wrong, usually a foolproof solution is easy enough to find

Recently I have come up with a foolproof solution to this old problem.

Meaning: a major inconvenience, something that’s going to stop us for a while

A major drawback was that nobody spoke English in that place.

Meaning: huge amount of work that you have to do, having more work than you’re required to do

I always have a heavy workload before the Christmas break.

Meaning: this is where we go to find a job, people we contact who we might be able to put us in line for an interview.

There many employment agencies in our towns and cities.

Meaning: a period of time when employee is allowed to be off work due to illness

After one month, employees are entitled to sick leave pay to cover absences due to illness or injury.

Meaning: conditions that are not suitable to working

It’s unfortunate that so many people around the world have to work in poor working conditions.

Meaning: it is a a metaphorical ladder that we like to climb to show that we have made progress in an organisation

So we start at the bottom of the ladder or the first step on. Then, as each year, a couple of years goes by, we get a promotion on DH. We move up the ladder just as we climb up any ladder.

Getting up that promotion ladder takes more than just doing your job well.

So that’s the end of those particular collocations connected with work. Let me just run through them again:

That’s all for today. Thanks for listening. If you need to contact me, please do and join me again soon.

10 Ways to finish an email in English

Accepting a promotion in English