Boosting your vocabulary by learning collocations is a great way to help you sound more natural and native when speaking in English.

Collocations are simply two or more words that come together on a frequent basis to form some expressions.

Collocations can be very useful because they can help you to understand English better, it can help you to be understood when you’re able to put a few words together rather than just single words.

So I’m going to give you these C1 English collocations for importance. And I’ll go through them and give you some examples.

Meaning: things that are better than average, that have certain or significant importance

She came first in the race and got a gold medal. This was a notable achievement for her.

Cycling for charity in that 50 kilometres race was a notable achievement. I didn’t think I could finish.

When we’re planning the yearly parade, our overriding concern is public safety. 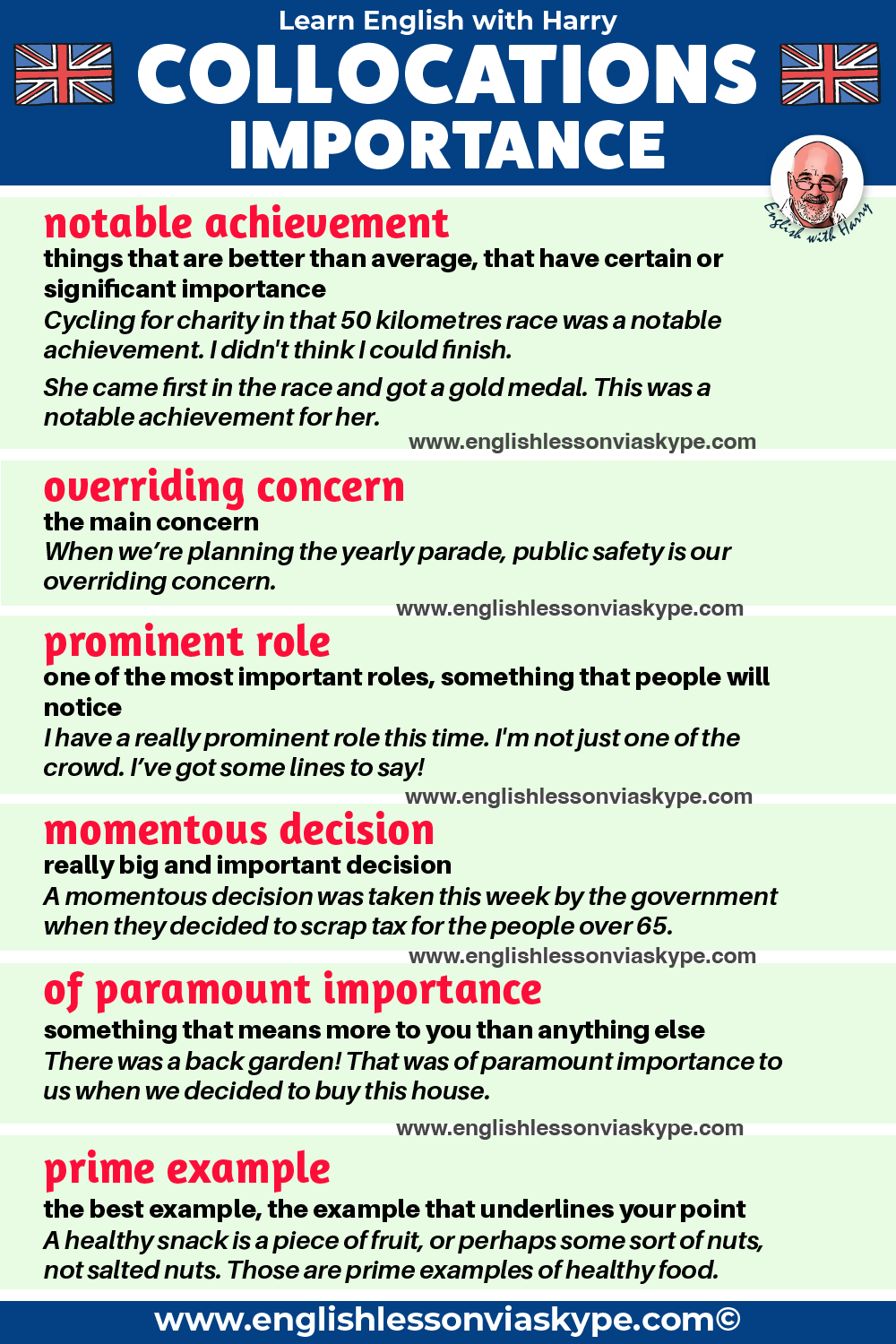 Meaning: one of the most important, something that people will take notice of

I have a really prominent role this time. I’m not just one of the crowd. I’ve got some lines to say!

Inflation plays a prominent role in these negotiations. The unions will want to make sure that any salary increases match inflation.

He’s going to play a prominent role in the negotiations to persuade people not to oppose this development.

A momentous decision was taken this week by the government when they decided to scrap tax for the people over 65.

This really isn’t working for me, I don’t like it. It’s too much pressure. In fact, it’s a momentous decision, but I’d like you to support me.

Meaning: something important that swings opinion in your favour

The decisive factor in getting people to agree to this was the travel distance from home.

The addition of new routes was a decisive factor in persuading people to agree to the new bus lane.

A decisive factor for moving to this particular city was that the education was much better.

Meaning: something that means more to you than anything else

When I’m deciding to change a job, the location of the office is of paramount importance to me.

There was a back garden! That was of paramount importance to us when we decided to buy this house.

Meaning: a very important figure,  that makes the difference

A key figure in the government today is the Minister of Finance. Finance is the most important aspect in relation to budgets, taxation, and of course, inflation.

Meaning: the best example, the example that underlines your point

A prime example of what I’m trying to say is when I walk through the canteen, I can guarantee that some kids will have crisps on their plate.

A healthy snack is a piece of fruit, or perhaps some sort of nuts, not salted nuts. Those are prime examples of healthy food. 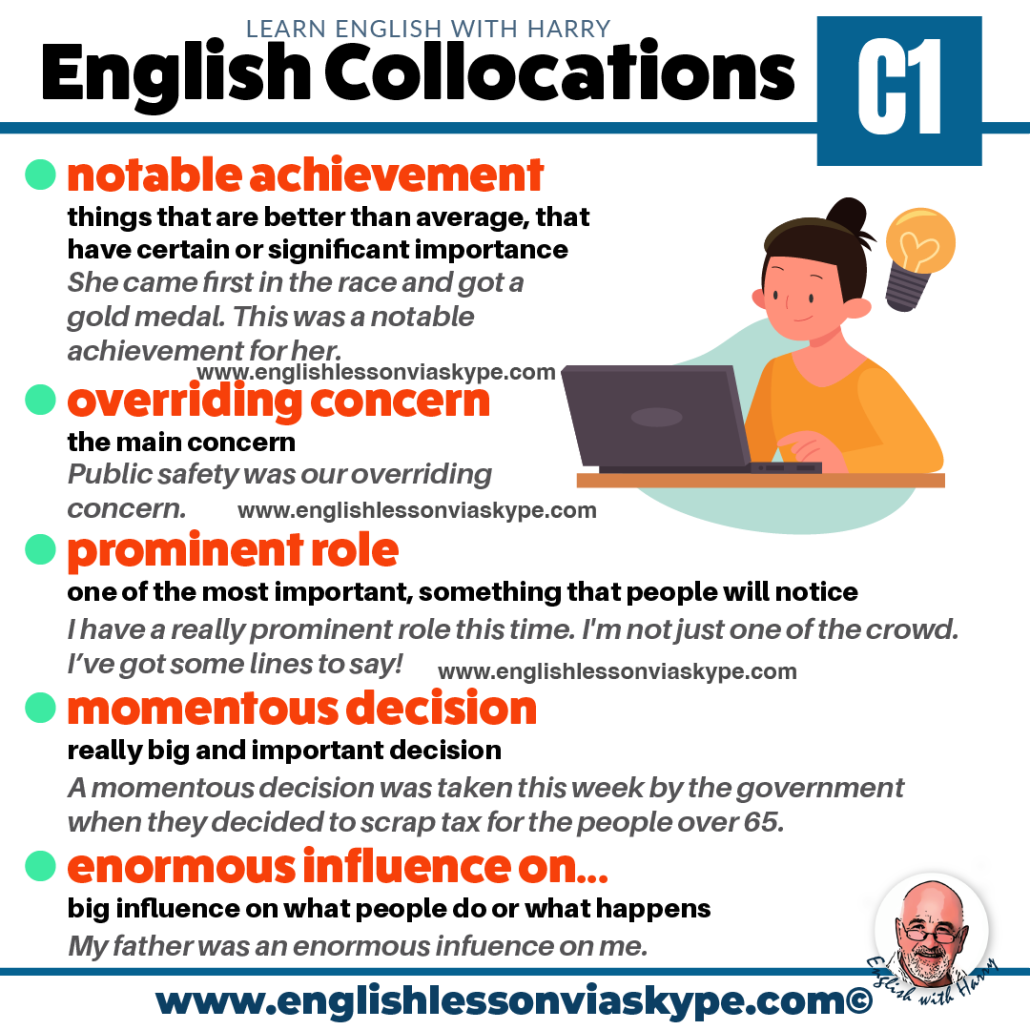 A leading issue is the number of cars that come in and out of the city every day.

an enormous influence on

Meaning: big influence on what people do or what happens

An enormous influence on me, when I was growing up, was my father.

When they were growing up, an enormous influence on them was the school that they attended.

Nelson Mandela was an enormous influence on my generation.

an enormous influence over sb

Meaning: to control somebody (not so positive)

So there are C1 Englsih collocations dealing with importance. Let me give them to you one more time.

So 10 specific English collocations for importance and hopefully, you get some good examples from those.

You can contact me on www.englishlessonviaskype.com. Always happy to hear from you if I can help you further, I will. As always, thanks for listening. This is Harry saying goodbye until next time

8 Other words for Problem 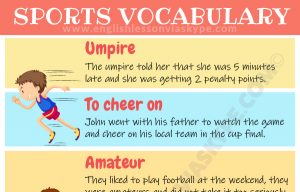 Here you will learn the IELTS Sports vocabulary. You will start with a short text to practice your English reading 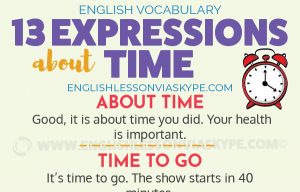 Here you will learn 13 English expressions about TIME. Time to go, time’s up, a matter of time and more. 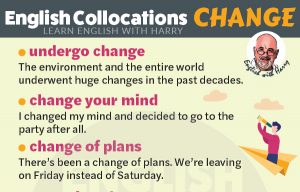 Phrases Related to Change – Talk About Changes in English

Here you will learn English phrases related to change. You will also expand your vocabulary by learning 7 other verbs