Here you will learn English expressions and idioms with TAKE.

If you scroll down, you will find a short video lesson on English Expressions with Take.

Expressions and Idioms with TAKE 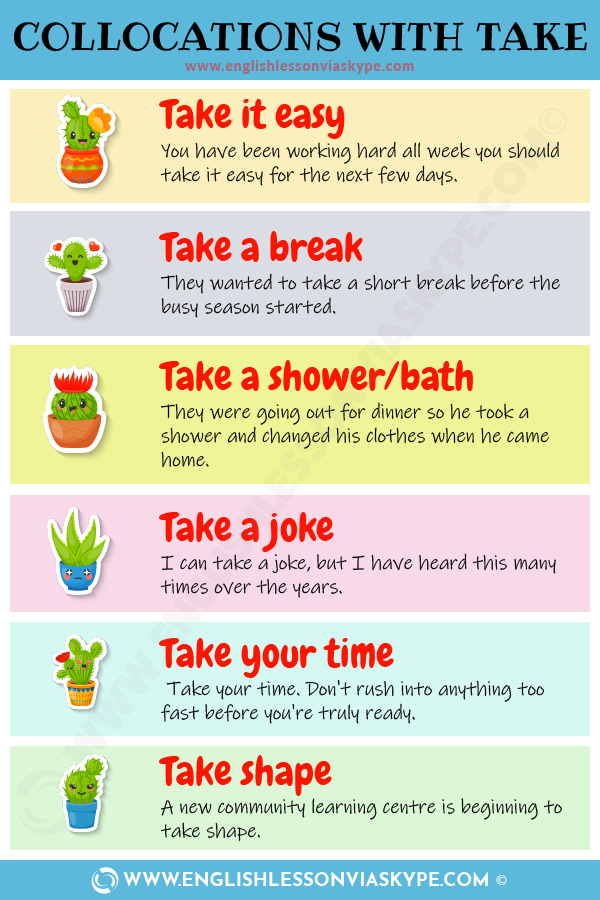 Expressions and Idioms with Take

The English verb TO TAKE (past tense – TOOK) is a difficult verb for English students because it has many different meanings and uses.

TAKE is one of the most frequently used verbs in the English language. Let’s review its forms and learn popular expressions and idioms with Take.

1. remove or steal something without permission

ex. He took the book from the shelf to look at the cover. (=to remove) or

He took the money from the table when no one was looking. (=to steal)

3. to wear a particular size in clothes/shoes

– What is your dress size, madam? – I usually take a size  10 but your chart would suggest that I am a size 6.

TO TAKE IT EASY

to relax and do nothing

ex. You have been working hard all week you should take it easy for the next few days.

TO TAKE A BREAK

to have a short holiday/rest

ex. He booked a spa resort for his wife and himself. They wanted to take a short break before the busy season started.

TO TAKE A SHOWER OR A BATH

to wash or bathe

ex. They were going out for dinner so he took a shower and changed his clothes when he came home.

The English Verb to Take 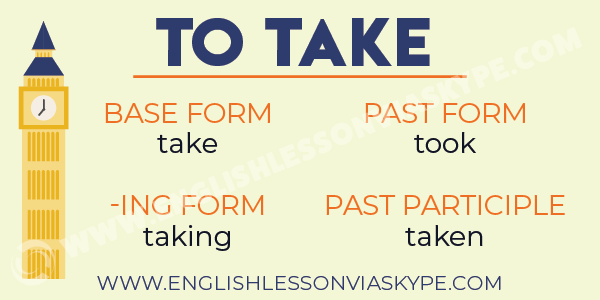 not be offended if someone says something funny about you, to be able to laugh at one’s joke about yourself

Example:  I can take a joke, but I have heard this many times over the years.

this is a very common English expression when we don’t want somebody to hurry, take as much time as you need

Example:  Take your time. Don’t rush into anything too fast before you’re truly ready.

Expressions and Idioms with Take

TAKE ADVANTAGE OF SOMETHING

Example: He took advantage of strong winds to win the race.

TAKE ADVANTAGE OF SOMEONE

to use someone’s weakness to get what you want

Example:  He had no idea what he was saying and the media took advantage of him.

TAKE  ITS TOLL (OF SOMETHING)

to cause a lot harm or damage

Example:  The financial meltdown took its toll last year as some 15,000 jobs were cut in the first quarter alone.

to become or look real, to materialise

Example: In his mid-forties John realised that it’s probably the best time to take the plunge and start working full time on his own business.

TAKE  SOMEONE UNDER ONE’S WING

to protect someone from something, to care for someone

Example: Phil immediately took the new boy under his wing and introduced him to his friends.

Please let me know if there are any difficult words in this video that you didn’t understand.

Make sure that you check my post on 13 Phrasal Verbs with Take with meanings and examples.

Difference between ONTO and INTO