Learn better ways to say “I don’t like it” in English.

I try to help you to get a better understanding of the English language. If you’re preparing for those proficiency exams, IELTS, CAE, TOEFL, etc. Preparing for the job interview in English.

Or if you just happen to want to improve your conversational skills and business English, this is the place for you.

It’s an advanced English lesson. And we’re talking about better ways to say “I don’t like.”

So these are advanced English polite ways to say, I don’t like something.

Let’s get cracking with these. And it’s split into two parts. One part is dealing with when you maybe perhaps don’t know the people so well, so what would you say?

And then some phrases where you do know the people or you know them a little better.

Let’s start with those people you don’t know so well.

it’s not my thing

Meaning: it’s not something you usually do, but you don’t want to insult them

Thanks, but no thanks. It’s just not my thing. It’s not something I usually do.

I’m not into that

Meaning: it’s not something you’ve got a great interest in

Thanks for the invitation but I’m not into horse racing at all.

I’m not a fan of horse racing.

I’m not a fan of sports in general. I really don’t take to sports so much. 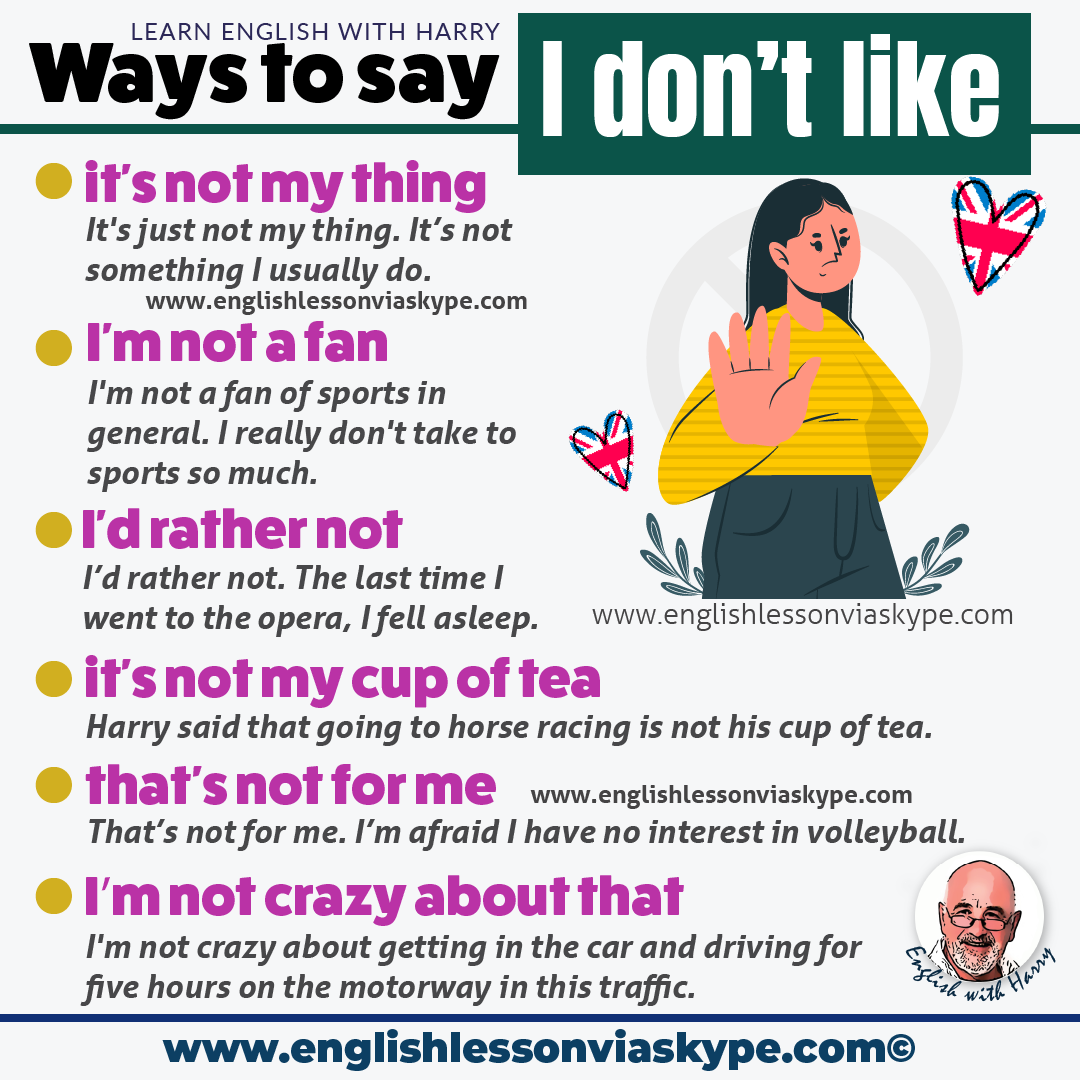 it’s not my cup of tea

Thanks for asking but it’s not my cup of tea.

Harry said that going to horse racing is not his cup of tea.

Meaning: (more formal) use it if you want to refuse an invitation

I’d rather not. The last time I went to the opera, I fell asleep. But thanks very much for thinking of me.

that’s not for me

That’s not for me. I’m afraid I have no interest in volleyball. I prefer to sit at home and read a book.

I’m not crazy about that

Meaning: (less formal) something doesn’t appeal to you

I’m not crazy about getting in the car and driving for five hours on the motorway in this traffic.

Meaning: something doesn’t amuse you, it doesn’t excite you

I guess it works for some people but it just doesn’t tickle my fancy. I like the original movie.

So these are the expressions when we’re talking to somebody who we don’t know quite so well.

And we want to tell them in a nice way in a polite way that we don’t like it.

Meaning: It was boring.

Meaning: It was boring.

It was an experience.

Meaning: I don’t want to repeat that. 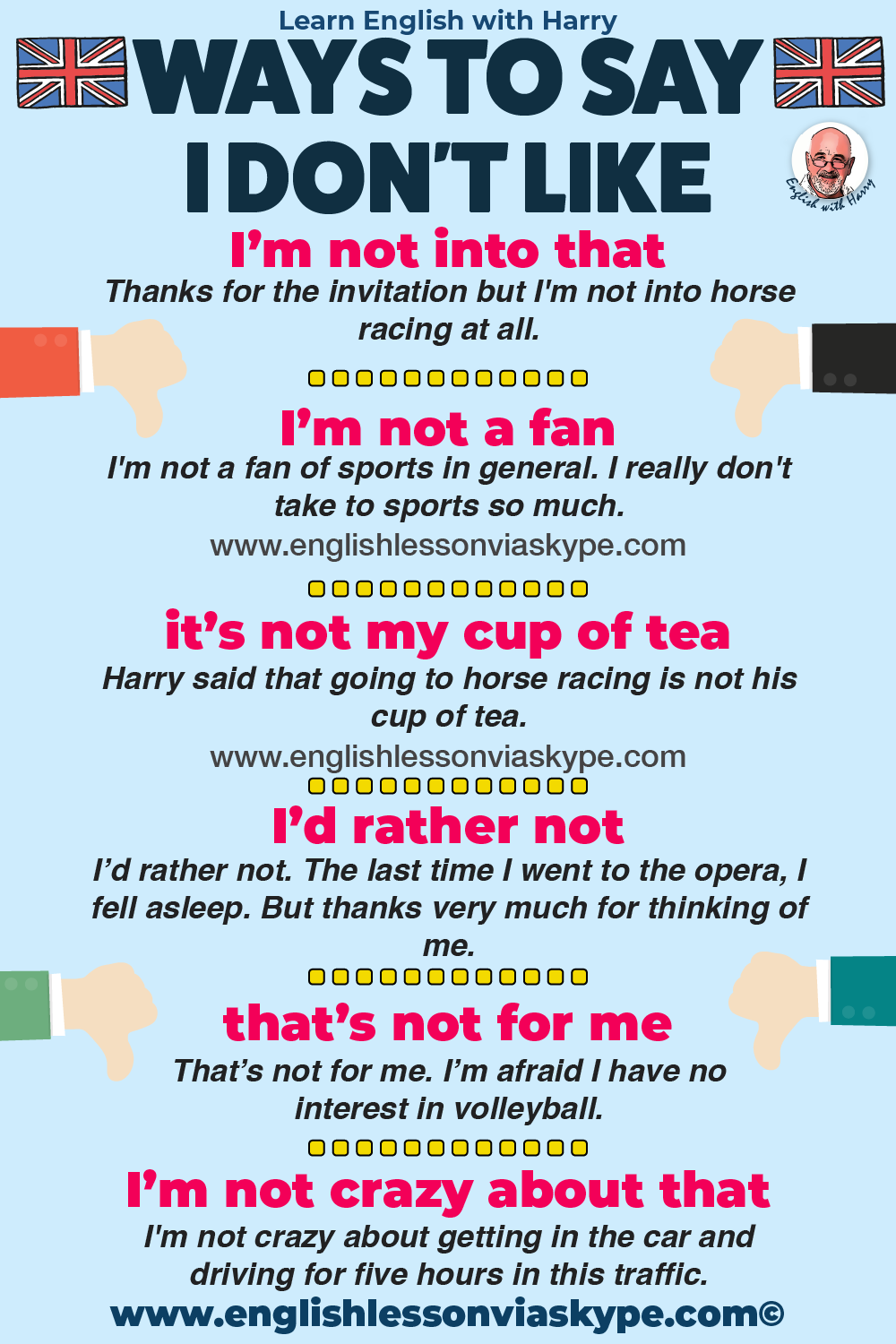 If you know someone a little better

You can be really stronger with your language. Put more emphasis on the words that will tell your partner or the other person exactly what you think.

So there won’t be any room for misunderstanding when they use those sorts of phrases in English.

I can’t stand that type of movies.

I loathe that actor.

I really loathe that type of documentary.

I cannot stand that.

I despise board games.

I hate wasting time in the rain chasing the little white ball around a golf course.

So there are better ways that you can say I don’t like it in English. They are more polite. And that all adds to your advanced English speaking.

This is Harry saying goodbye. Thanks for listening if you need to contact me, please visit www.englishlessonviaskype.com and check out online English lessons on Zoom and Skype.

Have you ever looked at some English words that are spelled differently pronounced the same but have different meanings? These 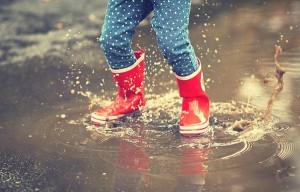 Weather is a major topic in English conversation. In Britain weather changes hourly so it comes as no 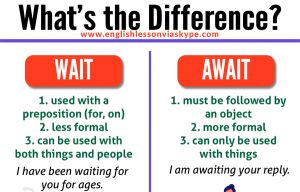 WAIT vs AWAIT – What’s the Difference?

Wait vs Await, how to use them correctly? I have a very active account on Instagram @englishlessonskype  and yesterday I