Learn family idioms in English with meanings and examples. Important idiomatic expressions to help you describe families in an informal way. Improve your vocabulary and start speaking like a native speaker. 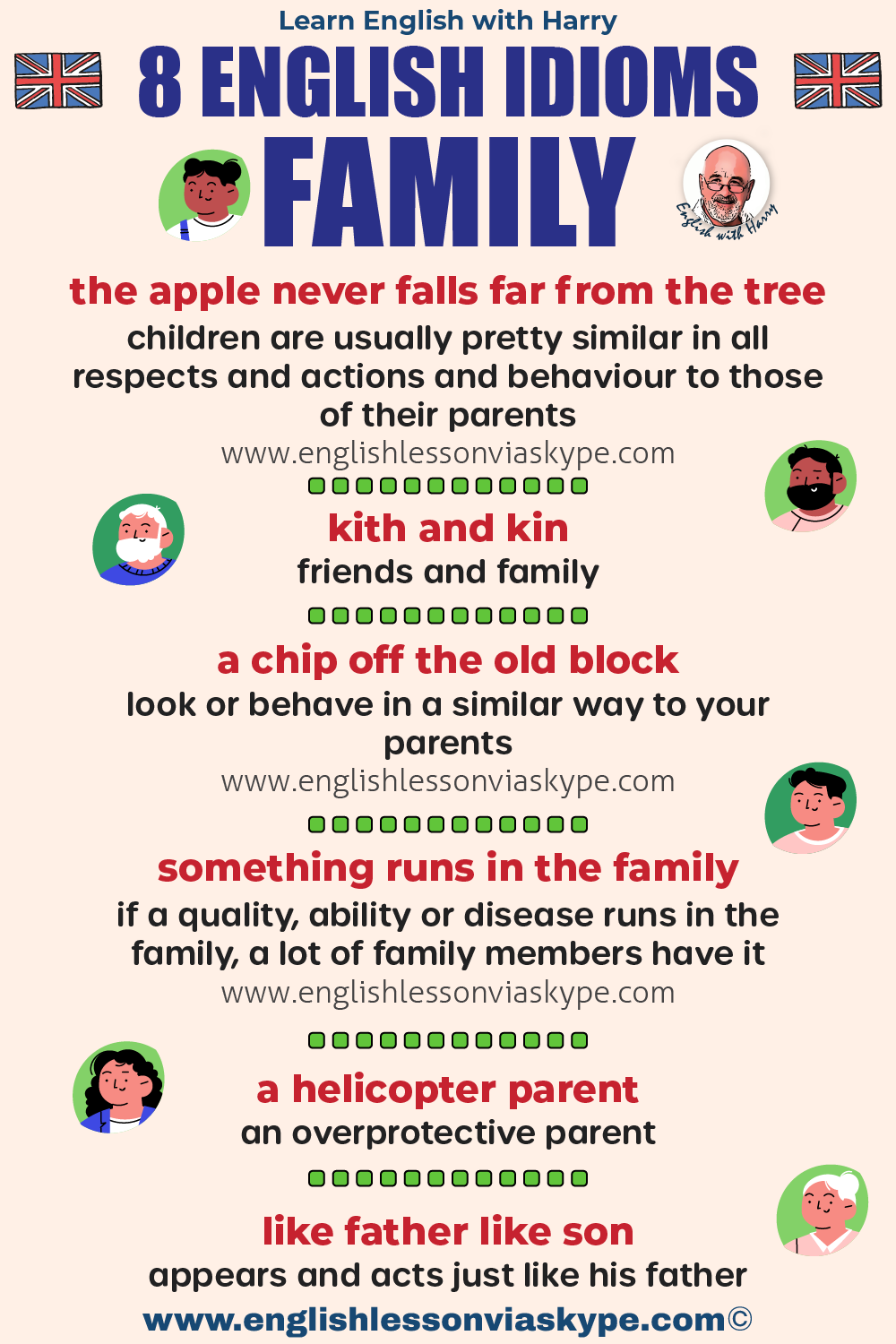 Hi there, this is Harry and welcome to my English learning podcast where I try to help you to get a better understanding of the English language. Help you with the English vocabulary, grammar, pronunciation, phrasal verbs. In this particular episode, we’re going to look at some idioms.

We’re going to talk about family idioms, those idioms connected with families.

Let’s start with the first one

In the old days when somebody died, they would try to find the next of kin. The old-fashioned way of saying who are their surviving family members, wife, brothers, sisters, whoever they may be.

And when somebody died some great family leader or king of the clan, he would be surrounded by kith and kin, all his friends, those close to him, and the kin, the family that those that are closest to him. Yep. And we talk about kindred spirits. Again, it’s connected with family. Okay, so kith and kin.

About 50 families turned up for their wedding along with their kith and kin.

the apple never falls far from the tree

Meaning: children are usually pretty similar in all respects and actions and behaviour to those of their parents; can be used to refer to habits, behaviour and also looks

Adam’s dad has always been a determined, hard-working man. The apple doesn’t fall far from the tree.

a chip off the old block

Meaning: look or behave in a similar way to your parents

A chip is a piece of wood. When you chip wood with a knife or something, you cut it and it falls off. So people spent a lot of time in the old days using a knife just to whittle away and carve wood just as a sort of a pastime or if they were bored.

We usually use it in quite a positive way.

Jim worked alongside his father from a very young age, learning and perfecting his craft just as his father did. He’s a chip off the old block.

runs in the family

Meaning: if a quality, ability or disease runs in the family, a lot of family members have it

His parents were both medics. The grandparents, and even if you go back as far as the great grandparents, were also medics and lawyers. It runs in the family.

It could be something like farming, for example. It can run in the family. In Irish society, many, many years ago, they had very large families. The eldest son usually inherited the farm. So the father left it to the eldest son, who in turn would leave it to his son, and so on. So the ownership of the farm ran in the family.

It could also be a disease.

A rare bleeding disorder, haemophilia B, was carried by Queen Victoria and ran in most of the royal families in Europe. 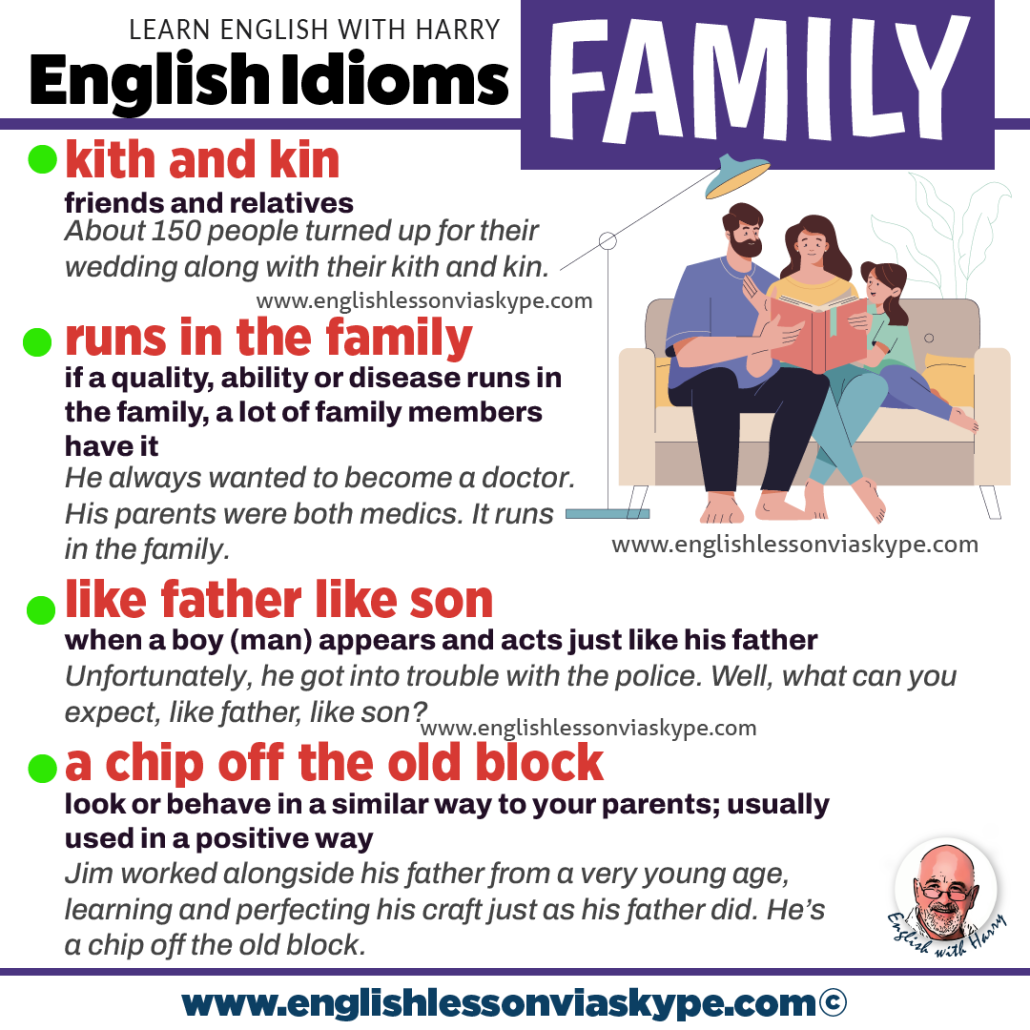 to be born with a silver spoon in your mouth

Meaning: to have a very, very lucky start in life; have a huge advantage, usually financial, over everybody else

You didn’t have to worry about where the money was coming from.

You didn’t have to worry about which school you’re going to go to.

Meaning: when a boy (man) appears and acts just like his father

Unfortunately, he got into trouble with the police. Well, what can you expect, like father, like son?

Meaning: a parent who overprotects and overcontrols their children, hovering around like a helicopter and monitoring everything that the children do

His mum was a real helicopter parent and sent instructions to the kitchen on how to cook her son’s rice for every meal.

to be in somebody’s blood

Meaning: to have some ability or a talent from birth because it already exists in the family

What do you expect? It’s in his blood, his father was a great athlete, his father represented the country in the Olympics.

Both his father and grandfather ran very successful businesses at the age of 20, so it runs in his blood.

Okay, so family idioms, those words and expressions connected with family members. A lot of them have similarities. Let me repeat them one more time:

Thanks for listening, I hope you’ve enjoyed it. Practice some of these family idioms and you might see them in books or hear them in movies.

If you want to contact me, then you can do so on www.englishlessonviaskype.com. 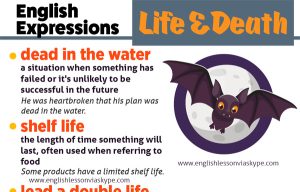 English Expressions About Life and Death

Here are some English expressions about life and death. The idea for this post came up to me as we 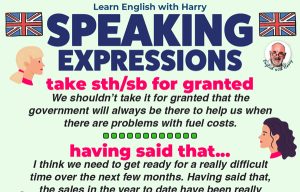 Learn advanced English expressions for daily use. These phrases are used by natives on a daily basis to expand and