So in this particular lesson, we’re going to look at advanced English speaking verbs.

The verbs we use to describe how somebody speaks, or how we hear them speaking, or the sounds they make.

So lots of them are very strange and maybe a little bit unusual for you, but I’ll explain them to you and I’ll give you plenty of examples.

So we’re going to talk first of all when people are talking loudly.

So when we’re talking loudly, here are the verbs we can use:

Meaning: to speak with a strong, loud, clear sound; to shout (often when angry or in pain)

I saw my friends on the other side of the park, and I yelled to get their attention.

Meaning: to say something in a loud angry voice (we usually bark orders)

Somebody from behind the counter barked (out) a few orders to the staff and left.

Meaning: usually speak or shout in a high-pitched voice; for example, if you get a shock

She screeched out loud when she the size of the spider in the bath.

Meaning: to say or cry something in a loud and high voice (because of pain, surprise, etc)

If you go to a pop concert, then you’ll hear people screaming out the music.

The bartender couldn’t hear John, so he had to scream to get their attention. 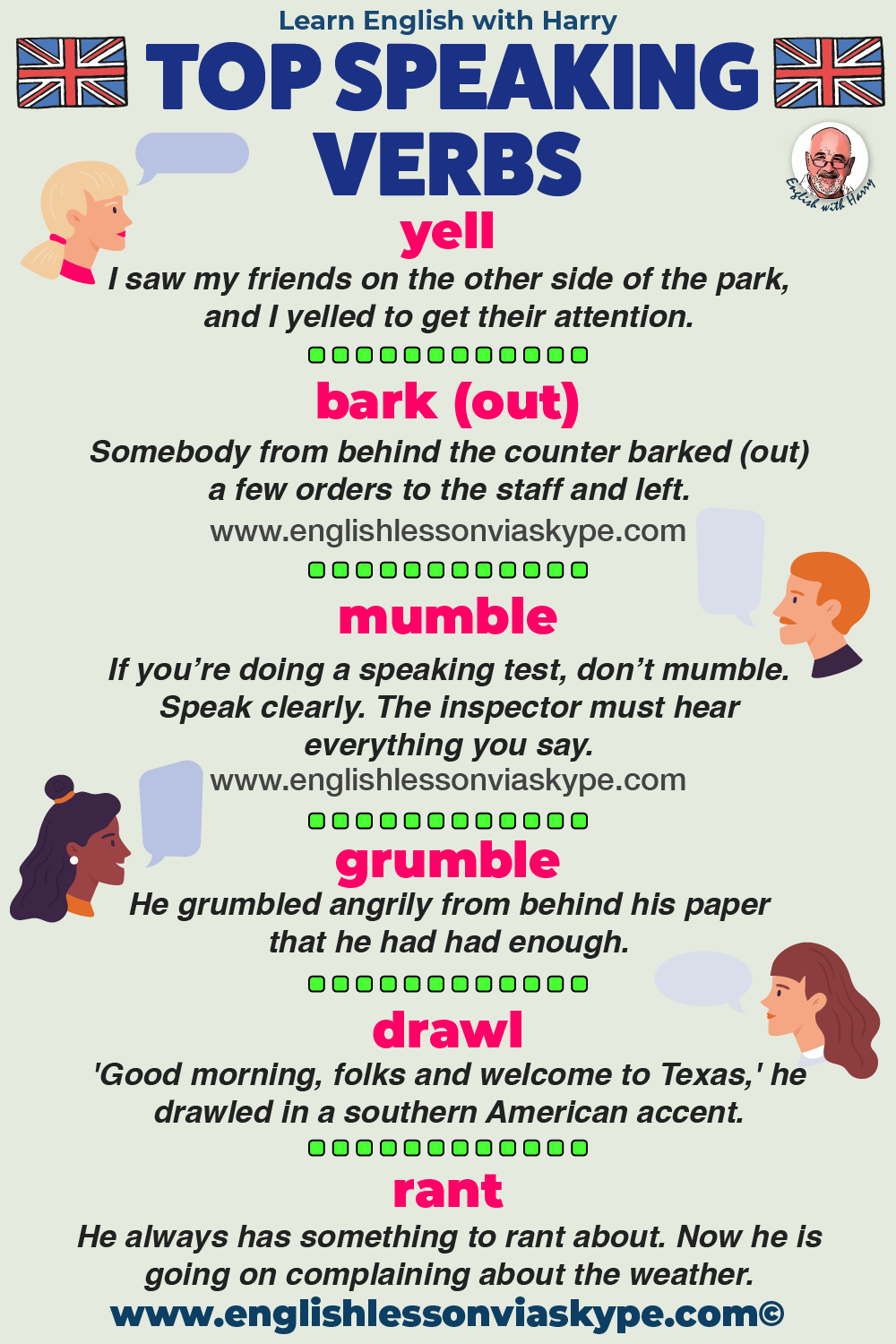 Then the opposite then is to speak quietly.

And the type of verbs that are used for speaking quietly will be:

Meaning: to speak in a very, very, very low voice (like a mouse)

People are asked not to make noise in a library, so they have to whisper.

Meaning: to speak in a low, barely audible voice (often in irritation)

My mother always encouraged me to speak clearly and not to mutter.

Now, if we talk about verbs connected with speaking negatively, let’s look at a few of those.

Meaning: to complain in a way that is unreasonable (usually in a loud manner)

He’s been ranting on about the service in that restaurant for days, I wish he would just go and complain.

He always has something to rant about. Now he is going on complaining about the weather.

Meaning: to talk at length in a confused way, without any structure

Meaning: to talk continuously in a foolish, incomprehensible way

He rambles on. He’s been babbling on about that for ages.

Meaning: to complain about something over a longer period of time

He grumbled angrily from behind his paper that he had had enough.

Meaning: complain about something in an annoying way

I kept moaning all the way through the movie about how ridiculous it was but still watched it.

Meaning: to speak in an unfriendly and aggressive way

He came into the office with water dripping from everywhere, his colleague asked him if it was raining he growled back in an annoyed tone, ‘What do you think?’

Meaning: to speak about something in a very enthusiastic way

He’s been raving about that hotel since he got back from his holiday. You’d think it was the only hotel in the world!

It depends on how you use “rave,” it could be both positive and negative.

Meaning: to say something in a way that is not clear enough and difficult to understand

If you’re doing a speaking test, don’t mumble. Speak clearly. The inspector must hear everything you say.

Meaning: to speak with difficulty, it can also be a medical condition

King George VI stuttered all his life. It was hard for him to give speeches to the British public.

Meaning: to speak in a slow way and focus too much on the vowels

‘Good morning, folks and welcome to Texas,’ he drawled in a southern American accent. 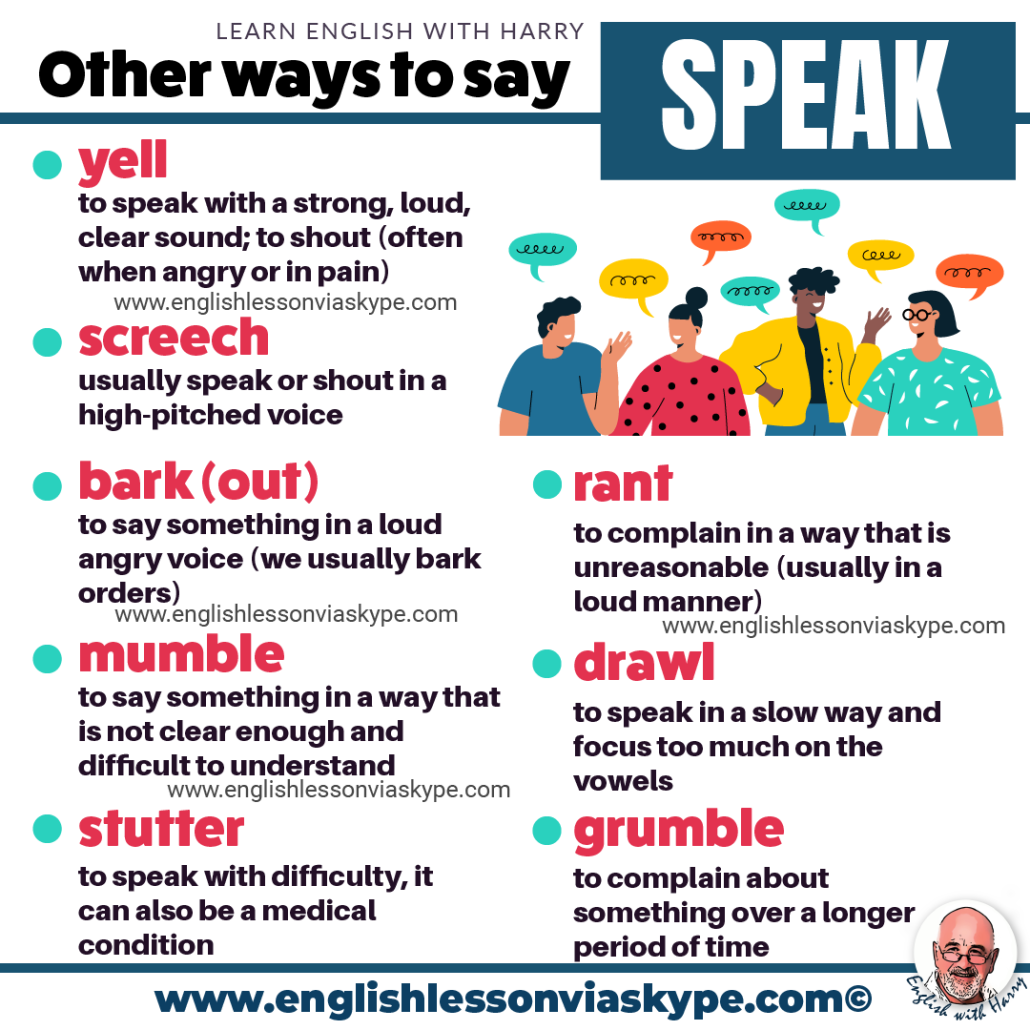 Okay, so we’re talking here about different verbs in connection with speaking and talking.

Let me give these speaking verbs in English to you one more time.

And one more without a category:

Okay, so they’re all advanced ways of speaking in English.

I hope you enjoyed those. You can practice them and practice your American drawl if you really wish to.

I always enjoy it when you listen to and watch my English lessons, I’m very grateful.

If you need anything you can write to me at englishlessonviaskype.com.

And as always, join me again soon, Harry signing off.

15 Phrasal verbs with AWAY 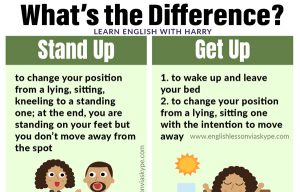 Difference between Stand Up and Get Up

Here you will learn the difference between ‘stand up’ and ‘get up’. How to use confusing English verbs in a sentence correctly. Which verb should you use to express the first thing you do in the morning? 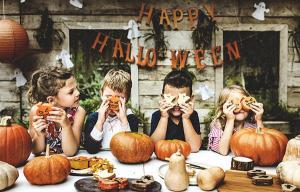 Autumn is here (where I am living certainly) and is commonly seen as the stepping stone (route, how to get 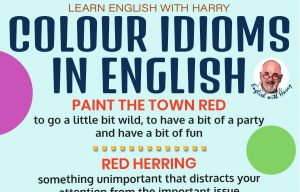