Are you getting excited about summer? Even though we in the UK are getting far too many grey days during the summer, we are still very excited when it finally arrives. Let’s get ready for summer and explore some English summer vocabulary.

In this post I also want to focus on popular  summer idioms that you can use in your daily English conversations. And you will find them below the infographics. 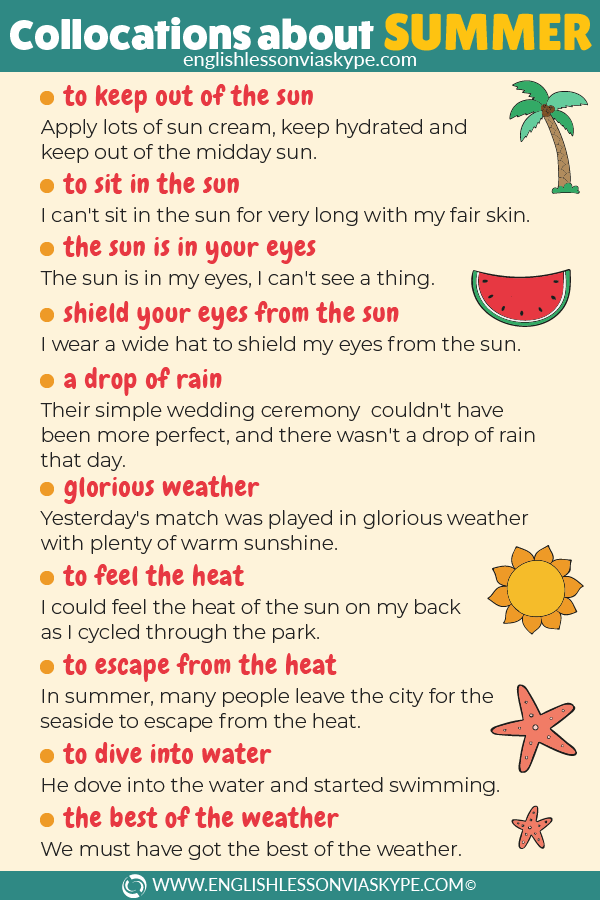 KEEP OUT OF THE SUN

Example: Be careful when you’re on holiday. Apply lots of sun cream, keep hydrated and keep out of the midday sun if you can.

SIT IN THE SUN

Example: I can’t sit in the sun for very long with my fair skin.

THE SUN IS IN YOUR EYES

Example: The sun is in my eyes, I can’t see a thing.

SHIELD YOUR EYES FROM THE SUN

Example: I wear a wide hat to shield my eyes from the sun.

A DROP OF RAIN

Example: Their simple wedding ceremony  couldn’t have been more perfect, and there wasn’t a drop of rain that day.

Example: Yesterday’s match was played in glorious weather with plenty of warm sunshine.

THE BEST OF THE WEATHER

Example: It got clearer as I went North, so we must have got the best of the weather.

Example: I could feel the heat of the sun on my back as I cycled through the park.

ESCAPE FROM THE HEAT

Example: In summer, many people leave the city for the seaside to escape from the heat.

Example: He dove into the water and started swimming. 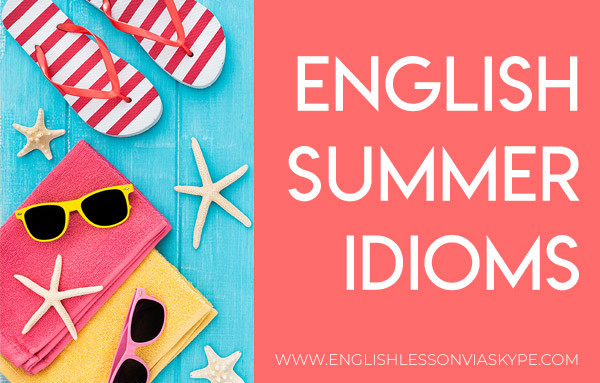 THE CALM BEFORE THE STORM

Example: It was like the calm before the storm, as I knew difficult times were to come.

a period of warm, dry weather in the late autumn

Example: Although the Indian summer is expected to bring us summer-like temperatures during September, we are now into the autumn season.

Example: The dogs days of summer are over and the kids have gone back to school!

if someone is full of hot air, they are full of nonsense, they talk a lot without saying anything worthwhile

Example: I did not believe a word she said. She was full of hot air.

everything or anywhere in the world

Example: London’s Oxford street has every shop under the sun, it is always at its busiest on a Thursday.

A PLACE IN THE SUN

a position which provides you with wealth and happiness, or whatever you have been hoping to achieve in life

Example: He was one of those people who was always looking for his place in the sun.

ONE SWALLOW DOESN’T MAKE A SUMMER

one fact or event doesn’t prove the rule, it may be an exception

Example: Their first album was a success, but they know that one swallow doesn’t make a summer and they’re prepared to work hard.

A COLD DAY IN JULY

something that will never happen

Example: It’ll be a cold day in July before I buy you a new car.

TO BE IN HOT WATER

to be in a lot of trouble

Example: The Minister was in hot water last week after admitting he lied about attending a controversial meeting.

TO MAKE HAY WHILE THE SUN SHINES

to not waste time, to take advantage of an opportunity as soon as it arises

Example: Our competitors will catch on to our strategy soon, so let’s make hay while the sun shines. 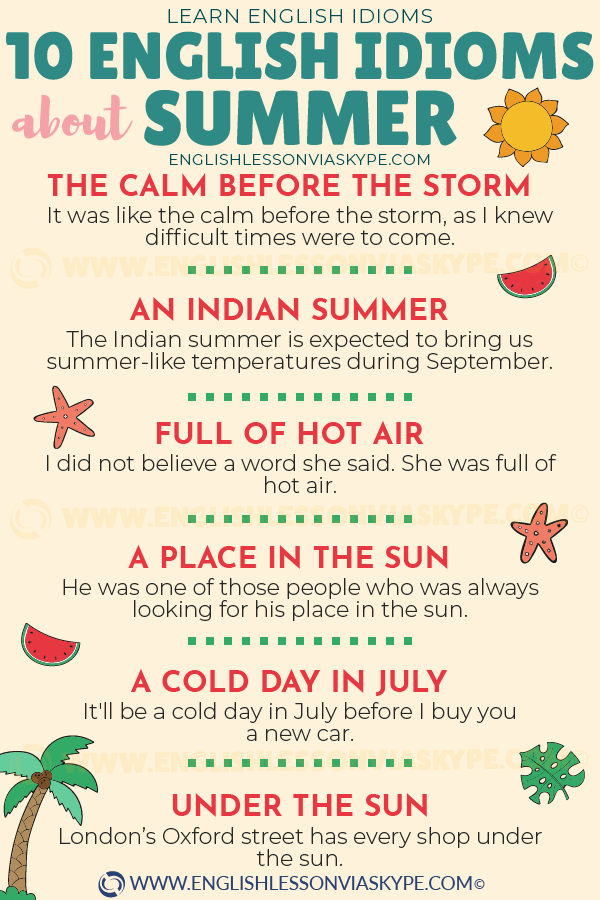 not really an English word but used frequently. Particularly relevant in the summer when a quick “nap” or “forty winks” in the afternoon is just what you need to be ready for a long summer evening.

Nap and forty winks refer to a quick sleep or rest.

If you are feeling a little hot and need to refresh a swim is often a good idea. A quick dip refers to a jump into a pool, river or sea to refresh yourself.

TOP UP THE TAN

Everyone likes to look good and when the sun shines we can get that “good feeling” with a sun tan. People like to catch the sun rays on a regular basis over the summer to keep the tan looking well naturally.

Twenty minutes in the sun a few times a week may just be enough to top up that tan!

Ice cream is a great way of cooling down when the sun gets a little too hot. Kids and adults all love the flavours. An old favourite and still available from all the ice cream stalls in UK cities is the 99. It’s a cone with ice cream a chocolate flake stuck into the ice cream and usually some strawberry syrup added. If you haven’t tried it you haven’t lived!!

Before flying to the sun became popular and within easy reach of the ordinary man, workers spent their two week summer vacation (usually the first two weeks in August) in a holiday camp organised and run by a company called Butlins. They still operate summer holiday camps in the UK today. They provide accommodation (chalets or small apartments) and entertainment for all the family. A good old British tradition still going strong today.

THE BUCKET AND SPADE

No holiday for the kids was complete without their traditional bucket and spade. These simple tools keep children of all ages occupied for hours on the beaches in any type of weather. Building sand castles and other impressive constructions with the help of Dad (or Mum) of course is a great diversion for all the family.

There are many wonderful songs with beautiful lyrics describing that summer feeling when we throw off the winter/spring clothes and get ready for the warm lazy summer days.

These are the opening lyrics of an old song from an opera called “Summertime” based in the deep southern states of America.

Whatever the year we all look forward to those long hot summer days and endless nights. Here are some words and phrases for your English summer vocabulary that you might just find useful.

Idioms and Phrases related to Thanksgiving

16 Better Ways to Say Angry or Annoyed in English

English Vocabulary for Renting an Apartment