Here you will learn 16 Phrasal Verbs with Push.

Watch this short video lesson and learn 4 phrasal verbs. After that, scroll down for a beautiful infographic and learn 12 more. Boost your vocabulary

Hi there.
Welcome to Harry’s World of Words and Phrases and English in a Minute.
We’re now looking at phrasal verbs with the verb push.
And we’re going to use prepositions ON, OFF, OVER and AROUND. Okay.
So TO PUSH ON means to get on and get something done.
Oh, I have to push on. I’ve got lots of work to do and I have to be home by 5 o’clock so let’s get moving.
PUSH AROUND means to bully somebody up, to get them to do something
– Do that.
– Stop pushing me around.
Okay. We can PUSH OFF which means will you go away and stop annoying you.
Just push off and bother somebody else.
And then PUSH OVER means to knock over so that something falls on the ground
We can use PUSHOVER as a noun.
He isn’t a pushover.
Meaning he’s not so easy to persuade or he’s not so easy to get him to change his mind.
Okay so phrasal verbs connected with PUSH.
Push on means to continue or get going
Push over means to knock over
Push around – to bully and
Push off means to go away
Okay so as always subscribe to our Channel and join us on www.englishlessonviaskype.com and we’d be seeing you soon. 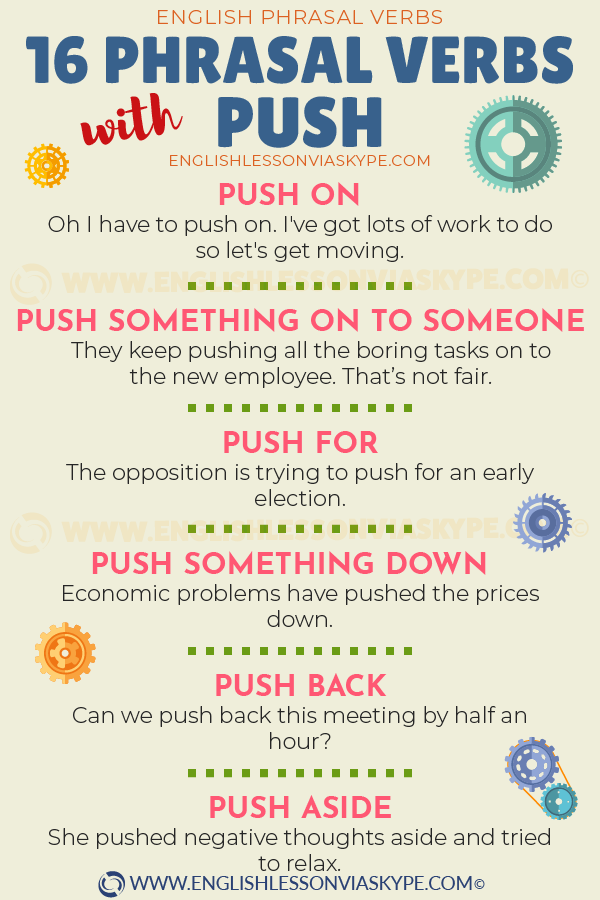 push something on to someone

Meaning: to force or impose something on to someone when not wanted

They keep pushing all the boring tasks on to the new employee. It is not fair.

Meaning: to try to persuade other people to help you achieve something

The opposition is trying to push for an early election.

Meaning: to move in front of other people who have been waiting in a line for something (British English)

He pushed in in front of me not saying a word.

Meaning: to elevate or lift up something

Wages were pushed up and the manufacturing sector lost competitiveness.

Meaning: to succeed in getting a law, plan or some proposal officially accepted

Parliament had pushed through a new law.

Meaning: to move something to a lower level or decrease the value of something

Economic problems have pushed the prices down.

Meaning: to continue trying to achieve something in a determined way

Federation is pushing ahead with plans to terminate his contract.

Meaning: to go away, to leave (British English, old fashioned)

I’m afraid I’ve got to be pushing along.

Meaning: to reschedule something for a later time/date

Can we push back this meeting by half an hour?

Meaning: to reschedule something for an earlier time/date than the original meeting, event

The arrival date has been pushed forward to April.

Meaning: to ignore or disregard something

She pushed negative thoughts aside and tried to relax.

Meaning: to distance yourself from other people, to refuse to be close with them

I keep pushing people away because I’m afraid I may hurt them.

Other Words to Say Difficult

Difference between EACH and EVERY