They say that the third Monday in January is the most depressing day of the year! Here are some English phrases with BLUE in them.  Yes, they really do say that on the third Monday in January people are more likely to feel blue (to feel depressed, to feel down) due to the fact that (because) the Christmas and New Year holidays are well and truly (completely) over. We have returned to work, we have nothing to look forward to in the short term (in the near future) AND you still have to wait approximately (about) two weeks to get paid! 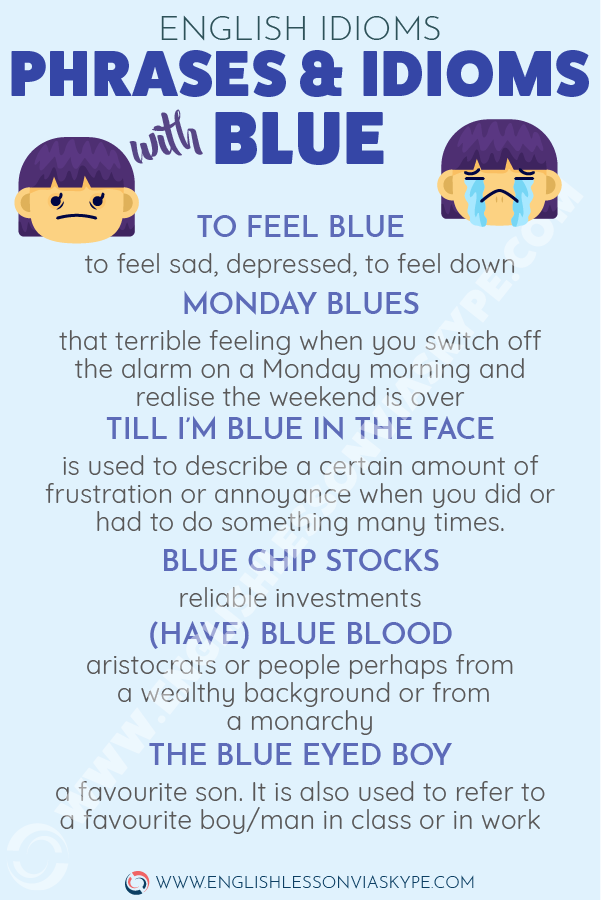 You can add to this quite long list the fact that you are probably in debt (owe a lot of money on your credit card) you have to return those presents you did not really like. And yes, the bills you did not pay before Christmas really have to be paid now. Ugh (terrible). So there are many reasons for feeling down (depressed or sad) on a Monday particularly in January but do not worry by the time you read this, January will be a distant memory (almost forgotten) I hope!

English Phrases with Blue in Them

Most Mondays are depressing in some way. That is why we refer to it generally as the Monday Morning Blues.

ex. Most of employees feel less motivated and always have Monday blues.

we can use this expression when we refer to aristocrats (people perhaps from a wealthy background or from a monarchy).

ex.  He left everyone in a belief that he was of a blue blood.

When we make investments we often try to invest in blue chip stocks.  So if we want to take a risk but not a big risk then blue chip stocks (Coca Cola or BP or Proctor & Gamble) are often recommended.

ex. One of the reasons to start investing in blue chip stocks is because of the income, or dividends they pay out.

This is used to describe a certain amount of frustration or annoyance when you did or had to do something many times.

ex. If she thought she was in the right she’d argue till she was blue in the face.

The fly it refers to is the blue bottle, a big horrible fly that buzzes around your room until you either kill it or it escapes. We use this expression to say that we are/were very busy doing lots of different things in a short space of time.

ex. I had a really terrible day. I was running around like a blue arsed fly all morning trying to get that meeting organised and then at the end of the day the bosses just cancelled it.
6. THE BLUE RINSE BRIGADE
not such a polite phrase that refers to a group of women of a certain age who dye their grey hair a blue or purple colour.
ex. For our holiday last year we managed to have picked a town that was full of retired people so it was very quiet. The restaurants and bars were full of old retired women. I felt like part of the blue rinse brigade. They actually turned out to be a lot of fun, singing and dancing!! 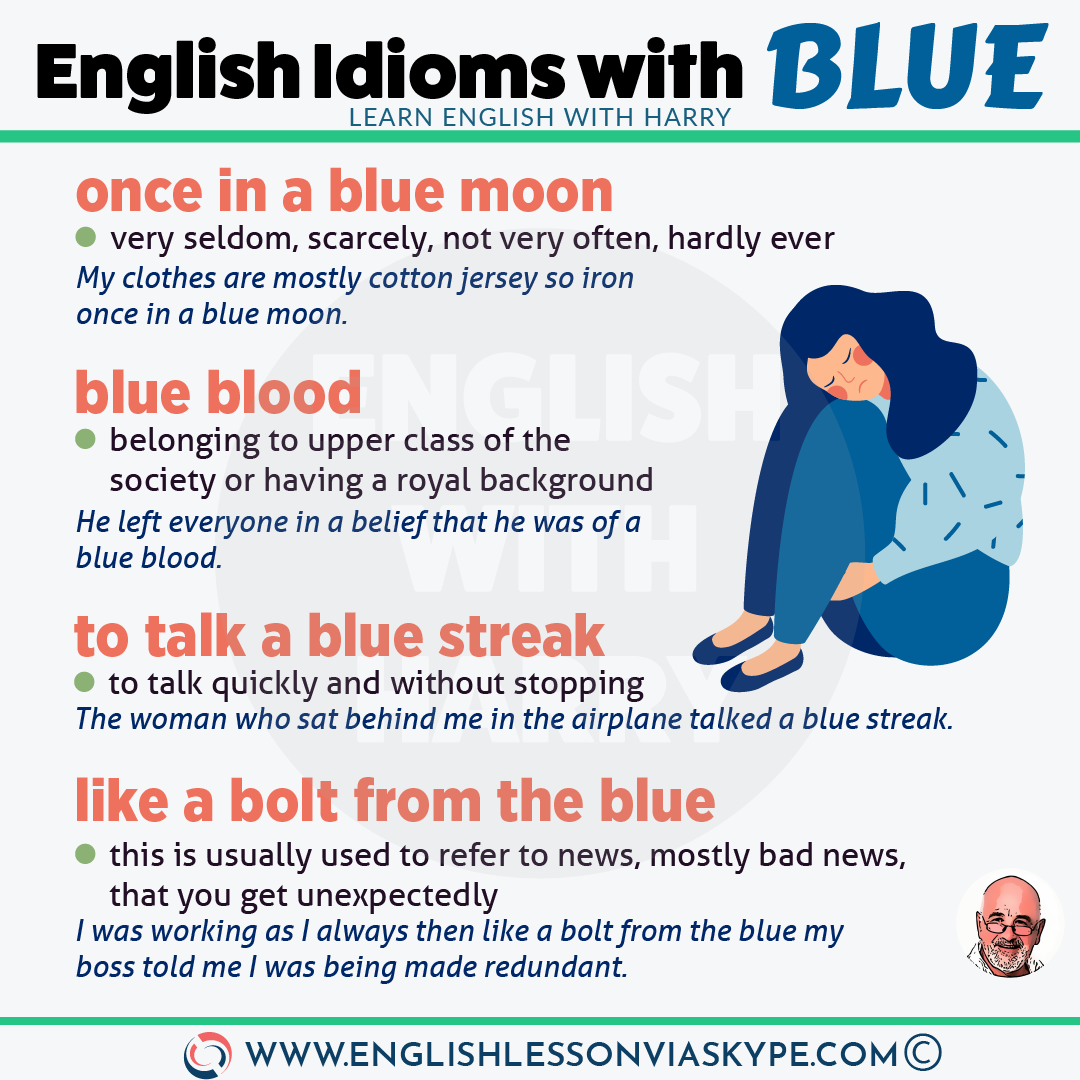 Share on facebook
Share on email
Share on twitter
Share on vk
7. OUT OF THE BLUE
This expression is used to describe something that happened or occurs unexpectedly and definitely not planned.
ex. I hadn’t heard a word from my brother for months. I thought he had forgotten all about me. Then out of the blue he called to say he was in town and wanted to meet up.

A very rare occurrence. The moon as we all know is (or it appears to us) white in the sky at night. Very occasionally it appears to change colour due to some activity in the atmosphere.
ex. A husband and wife were arguing about the household duties or chores (housework).
WIFE:  You never do anything around the house. You never help with the washing up or offer to do the ironing.
HUSBAND: That’s not true. I put the rubbish bins out last week and I ironed my shirt on Saturday!
WIFE: Yes, once in a blue moon but usually I do all the ironing!

9. LIKE A BOLT FROM THE BLUE
This expression is usually used to refer to news, mostly bad news, that you get unexpectedly.
ex. I was working as I always then like a bolt from the blue my boss asked to see me and told me I was being made redundant. It turns out that the company was losing money and 10 of us had to go.
10. TO GO OFF INTO THE BLUE
to go away suddenly, to disappear, to vanish
ex. My wife ordered a pizza which was delivered immediately but my order went off into the blue.

The next time you wake up on a Monday with that Monday Blue feeling remember, it is only a day of 24 hours like every other day and perhaps not so bad after all. So I hope your Mondays continue to be short and your coffee strong!

to feel blue – to feel sad, to feel down, to be depressed
due to the fact – because
well and truly – completely
in the short term – in the near future
to be in debt – to owe a lot of money usually on your credit card
approximately – about
ugh – terrible
to feel down – to feel depressed or sad
distant memory – almost forgotten
chores – housework

For more information on English Expressions, English  Phrasal Verbs and English Grammar Rules, check out the links below:

Difference between Think of and Think about

There are lots of songs that include the word  BLUE in the title and the reference is definitely depressing and sad.

For example, “When I’m feeling blue all I have to do” (Phil Collins)