The English verb TO GO (past tense – WENT, past perfect – GONE) has many uses and meanings. Let’s look at some of the common expressions with GO with examples and dialogue.

TO GO  means to travel, to move along, to depart.

I was asked to go to the new office next week to help them get organised.

Will you go by train or by car?

He went home after the meal was finished as he wanted to call his friend by skype.

The English verb TO GO can be used to describe a changing state (GO + -ING). This has many uses as follows:

2. to become very angry or annoyed

Example: She went mad when she saw him talking to a female colleague.

3. to do something extremely silly or stupid

Example: I went a bit mad and bought so many useless things, trying to cheer myself up.

4. to get overly excited

Example: He sang a classic song last night and the crowd went mad.

5. to become bored, impatient, or upset

Example: I think I would go mad if I was to stay here for more than a week. The village is too small.

this has a similar meaning to GO MAD, the difference is that GO MAD is not used in American English the same way and as often as it is in British English

Example: Sarah will go crazy if she finds out that she has to share her room with someone else.

He thought he was going crazy when he first met her.

when your hair colour changes from brown or black to grey, associated with ageing

Example: His hair was going grey. He blamed all the stress he was under (could also use “his hair was turning grey”).

when you hair’s beginning to thin out, bald patch appears on top of your head and gradually gets bigger

Example: When he went to the barbers shop the barber told him he was going bald and recommended a new shampoo that might help.

Example: He noticed a change in his eyesight over several months. The doctor told him he was going blind.

to develop hearing loss, to become unable to hear

Example: The doctor checked me out and confirmed that I was going deaf.

to become very excited or angry

Example: The crowd was going wild over the vote.

Scroll down for more expressions with Go and dialogue. 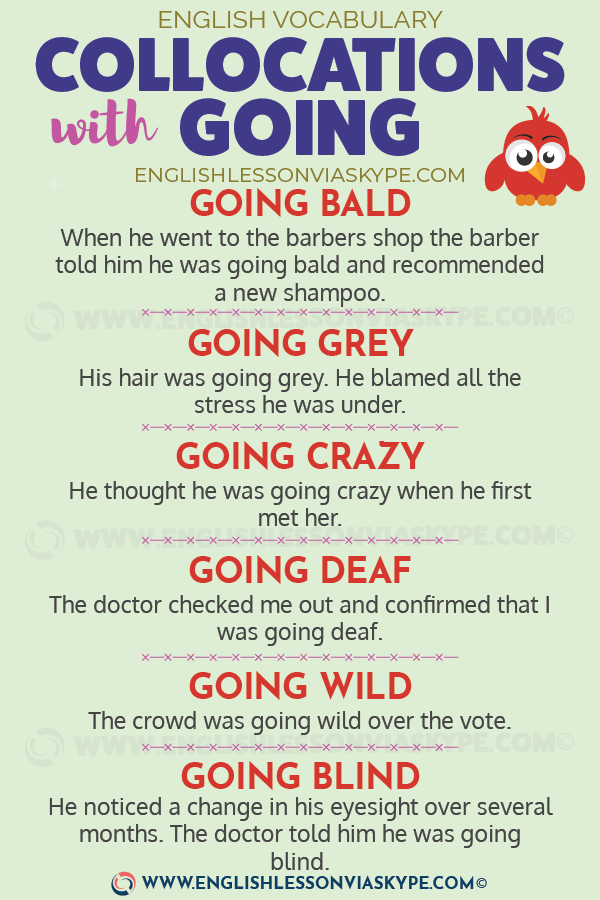 to deteriorate in quality or standards

Example: It started with financial crisis and it all went downhill from there.

to go as planned, to work without difficulties or interruptions

Example: It will go smoothly if you follow these instructions.

GO OUT OF FASHION

Example: Ruffles on the hem quickly went out of fashion.

to be widely accepted, to be well received

Example: His suggestion didn’t go down well with the board.

We can use the opposite – GO DOWN BADLY

Example: My boss went ballistic yesterday. He told me I’d have to do the work myself. 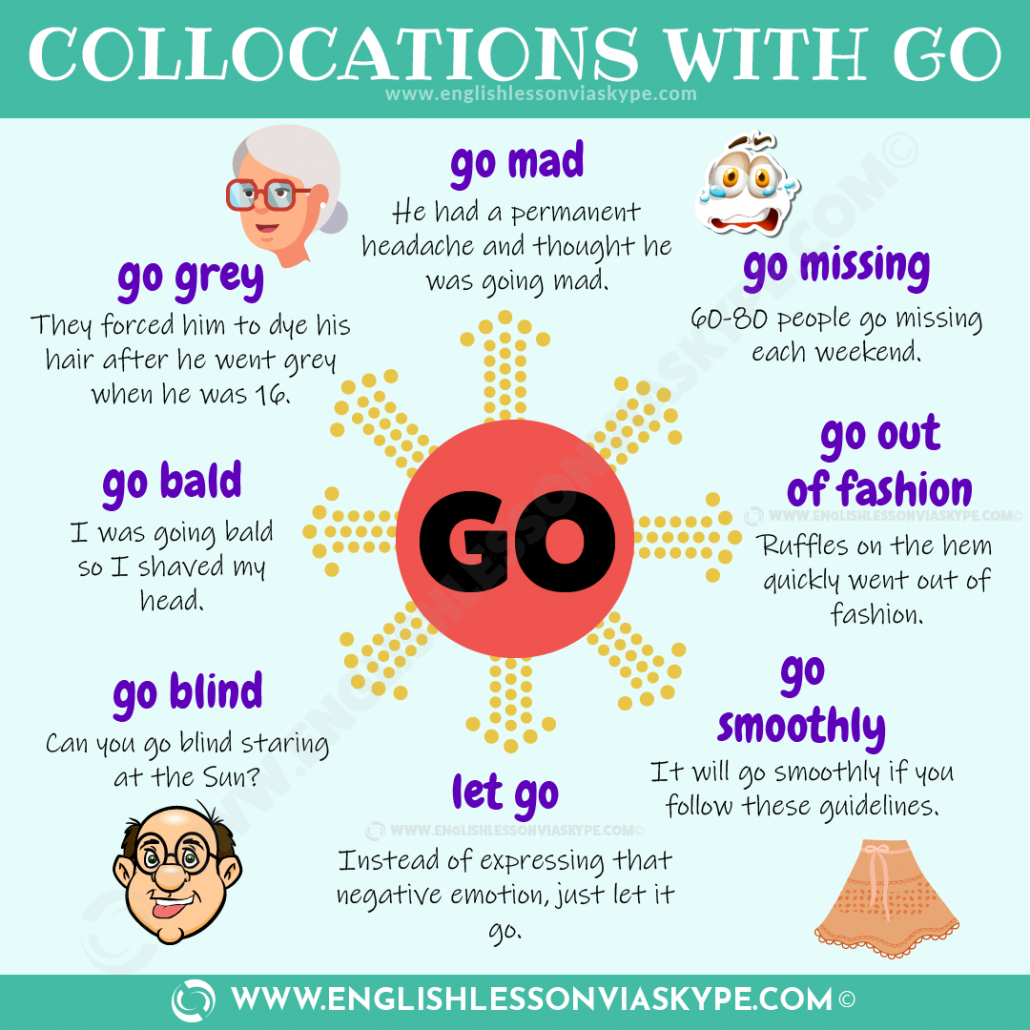 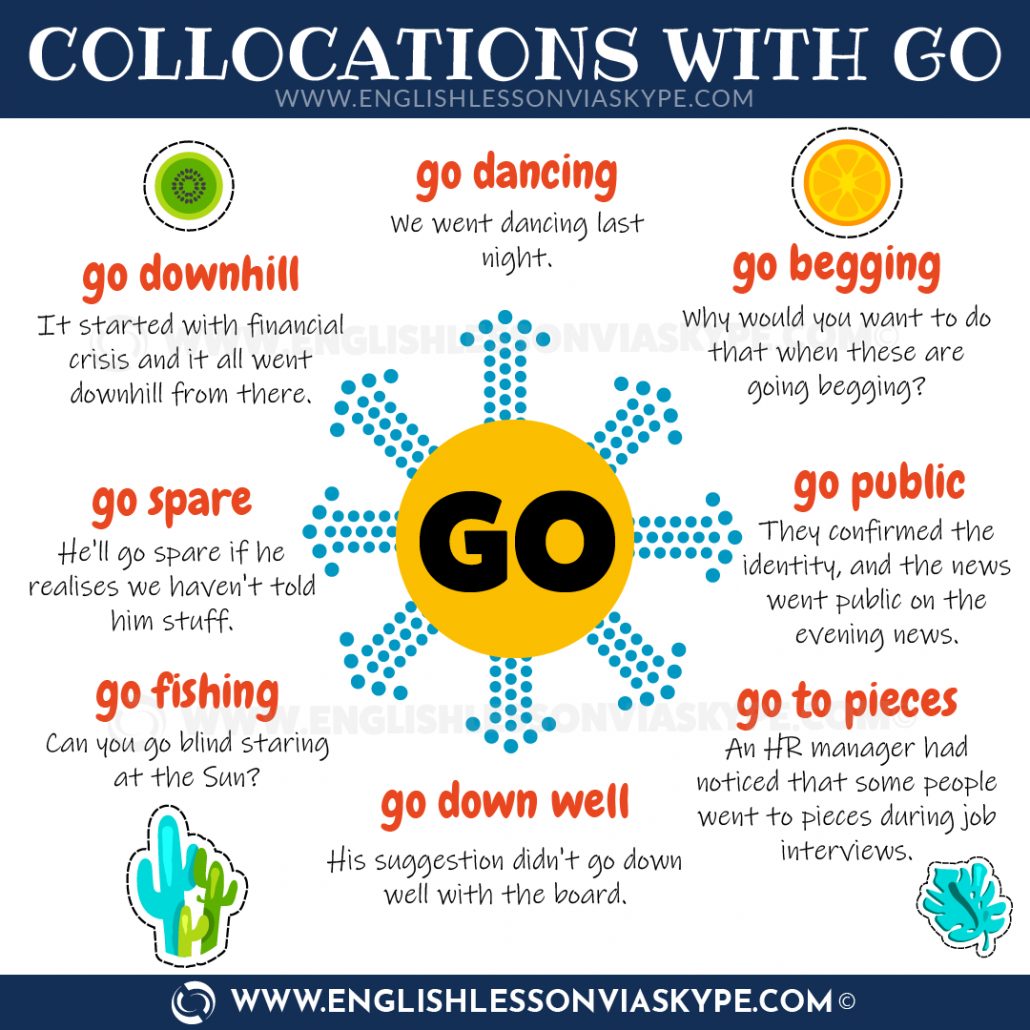 1. to tell the media about something that has been secret

Example: They confirmed the identity, and the news went public on the evening news.

2. to issue shares on the Stock Exchange for the public to buy

Example: Network security company went public 3 years ago and their shares are now valued at $11.

to deteriorate, to lose control of your feelings

Example: An HR manager had noticed that some people went to pieces during job interviews.

something is available because no one else wants it

Example: Why would you want to do that when these are going begging?

to become extremely angry or worried

Example: He’ll go spare if he realises we haven’t told him stuff.

Example: We tried to roast the turkey but it went arseways on us.

1. to release grasp, to stop holding something;

2. stop thinking and feeling sad (or angry) over things that happened in the past

I am sure most of you heard the song “Let it go” from Disney’s cartoon “Frozen”:

Let it go, let it go
Can’t hold it back anymore

Let it go, let it go
Turn away and slam the door

GOING is also used informally as a type of greeting in some countries.

How’s it going? = How are you or how are you doing.

Figure of Speech with the verb TO GO:

When the going gets tough the tough get going. = When things are difficult the strong (tough) people come out on top.

In order to gain a better understanding of how to use common English expressions with GO let’s take a look at this short dialogue:

MUM: Fine thanks. I just wanted to know when are you going to call around and collect that package that arrived in the post?

JOHN: Oh. Yeah, I forgot about it. Well, I am going out tonight with that girl I met last week so it will be at the weekend before I can collect it.

MUM: Ok. I am going to visit your Granny on Saturday so just let yourself in with your key. She is not too well.

JOHN: Oh dear. What did the doctor say to Gran when she went to the hospital last week?

MUM: He told her to take some rest and the bug will go eventually.

JOHN: Ok, tell her I was asking after her. How’s Dad keeping?

MUM: Your father is very worried he thinks he is going bald. He noticed a bald patch yesterday.

JOHN: Oh, he’s probably going mad about that. Look I have to go I am due back to work soon. I will call you soon. Bye

I hope you understand a bit better now how you can use the English verb TO GO.

If you really liked common expressions with GO drop me a line, tell me what you want to hear, see and read.

Phrasal Verbs with Around

Make vs Do Interactive Quiz

Plenty of free material is available on BBC Learning English.

English Expressions with the Word Rock

12 Collocations with the Preposition IN

If you’re thinking of changing your job in 2020,