Weather is really such a popular topic in Britain and Ireland. So I’ve decided to continue writing about English idioms related to weather and here are I have 10 more for you. 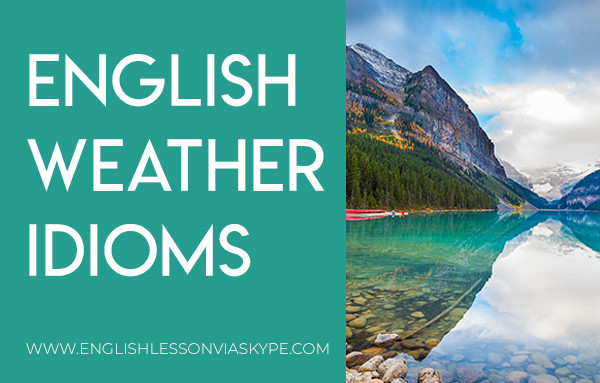 A STORM IN A TEACUP

Storms are usually not pleasant events. Lots of rain and thunder and high winds. However, sometimes people are over dramatic and prone to exaggeration. A teacup is quite small normally so even though we may spill a drop or two of tea it is not the end of the world.

ex. Harvey was inclined to exaggerate sometimes. He usually made things appear more serious than they were. On one occasion he was shouting that the machine was broken and it was going to cost a fortune to fix it. However, he had forgotten to switch on the power. A real storm in a teacup.

Everyone likes to be the centre of attention and particularly if they have been preparing for some special event for some time. To steal someone’s thunder means that someone takes the attention away from you either deliberately or accidentally.

ex. Mary was getting married and had spent months planning her dress and clothes for her special day. Imagine how she felt when on the big day her cousin arrived at the wedding reception wearing an identical dress and shoes! She really stole her thunder!

SAVE IT FOR A RAINY DAY

Generally when it rains we get frustrated as we can not go out as it is too wet. We might if we have money choose to go to the cinema or somewhere where it is dry and warm. So it is always good to have some money to use in this situation. We often use this expression when we save some money without knowing when it will be needed. “It is my rainy day money” or “I am saving it for a rainy day”.

ex. Peter asked his father if he would bring him to the shopping centre to buy some books. He offered to pay but his father said “No, I will get these. Save your money for a rainy day. You never know when you might need it”.

ALL IN A FOG – confused

ex. When we saw Michael that evening, he was all in a fog about what to do.

CAST A CLOUD OVER – ruin, depress

ex. This new decision casts a cloud over a region that is a driver of global growth.

WEATHER THE STORM – get through a difficult situation

ex. The financial crisis that started in 2007 wasn’t a pleasant experience for anyone but somehow the company weathered the storm. 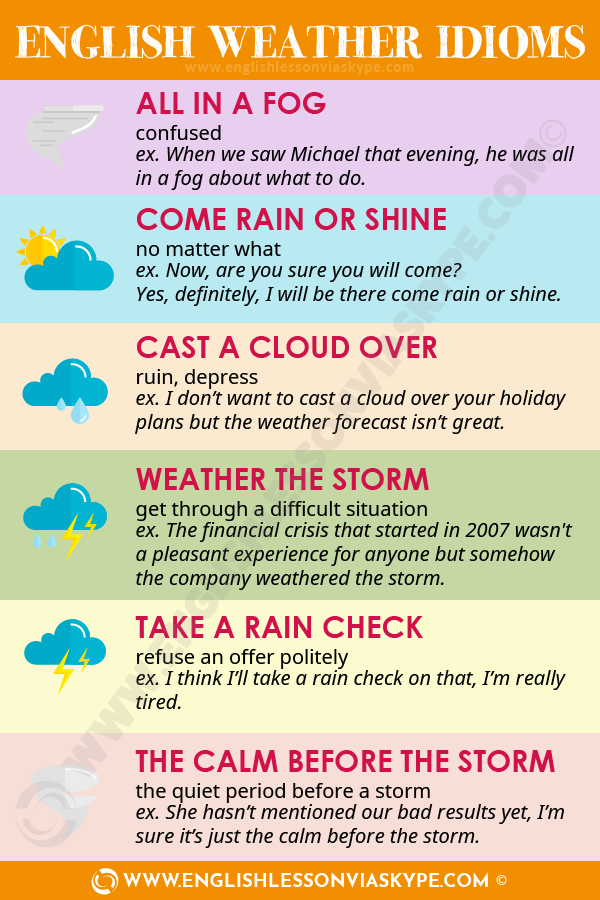 If we are not certain that we want to do something and we do not wish to commit ourselves we often say “no, I think I will take a rain check”. It means we decline an invitation or an offer and will perhaps do it again another time.

ex. David was sitting at home relaxing. It had been a busy week. His friend Mark called to see if he wanted to go to the match as he had another ticket. David said “thanks, but no, thanks. I think I will take a rain check on that. I am really tired. Perhaps another time”.

A parade is a happy time. A festival of fun at Christmas or Easter and always enjoyable. People in the streets with lots of music singing and fun. We do not like it if it rains at the time of the parade as people have no where to shelter and it spoils the occasion. So in our life we do not like it if someone spoils our fun and enjoyment when they “rain on our parade”.

ex. Breda was due to celebrate her birthday. She had invited her best friends to her home for some food and to have a good time. Her father told her she had to cancel as he had very important clients coming to the house that night for a meeting. Breda was heartbroken she really felt as if her father had rained on her parade.

Whatever the weather we get out and do what we had planned. If you lived in a country like Ireland or England where the weather can change a few times a day you cannot let the weather interfere with your plans. You just have to get on and do it. So when we promise someone to do something we often say “oh, yes come rain or shine”. It means we can rely on them.

ex. Conor was looking forward to the weekend. He had arranged a game of football with his college friends. He needed one more player so he called Paul.

– Can you play football on Saturday Paul ?
– Yes certainly what time and where?
– Great. Now, are you sure you will come?
– Yes, definitely, I will be there come rain or shine

to be prone to something – to tend to do something or experience something (usually bad or unpleasant)
occasion – time when something happens
to rely (on somebody) – to depend on somebody
exaggeration – when somebody makes something appear more important or worse than it really is
to decline – to refuse
to commit – to give your time and energy to something that you believe in
enjoyment – pleasure, happiness or satisfaction
to spoil – to ruin

Other Words for WALKING

English Idioms about Memory and Mind