Learn idioms related to technology. Here I have 10 interesting English idioms that are connected with technology. Nuts and bolts. Blow the fuse. Get your wires crossed. 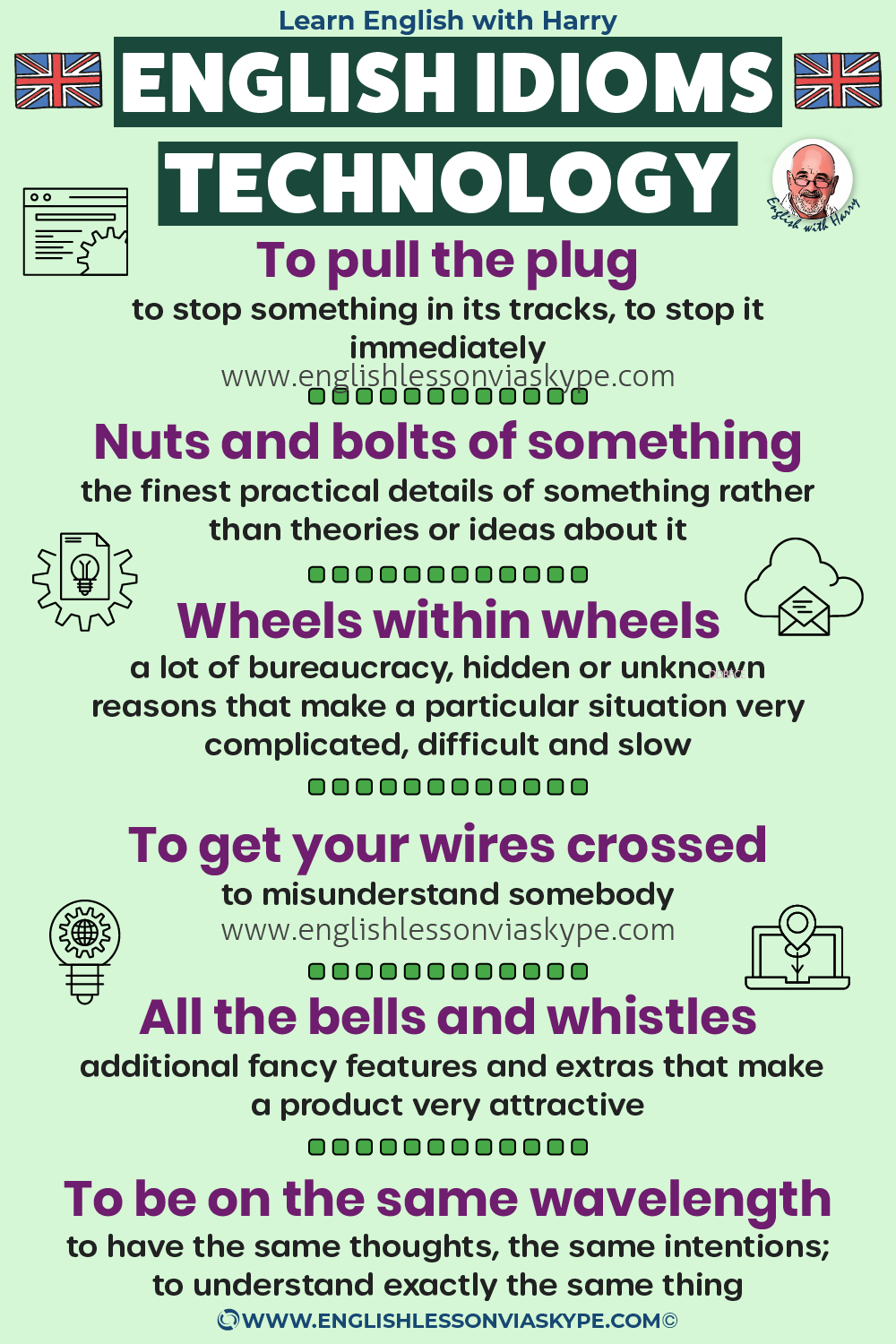 Hi there, this is Harry, and welcome back to my English learning podcast Speak Better English.

Here I try to give you a little bit of help with your English learning. Help you with conversational English, business English, the use of idiomatic expressions and phrasal verbs. If you want to contact me, I’ll give you the contact details at the end of this particular episode.

Let’s go through them one by one.

to pull the plug

Meaning: to stop something in its tracks, to stop it immediately

The government has pulled the plug on any future people being able to take advantage of this particular tax loophole by changing the legislation.

The business was not doing very well in the last 3 months, and the owners decided to pull the plug.

to blow a fuse

Meaning: when somebody blows a fuse, they get angry or agitated very quickly, and they really explode

The customer is going to blow a fuse if we don’t deliver it on time.

We can also use it in the negative.

I’m sorry, Dad, I had a slight accident with the car, but please don’t blow a fuse. 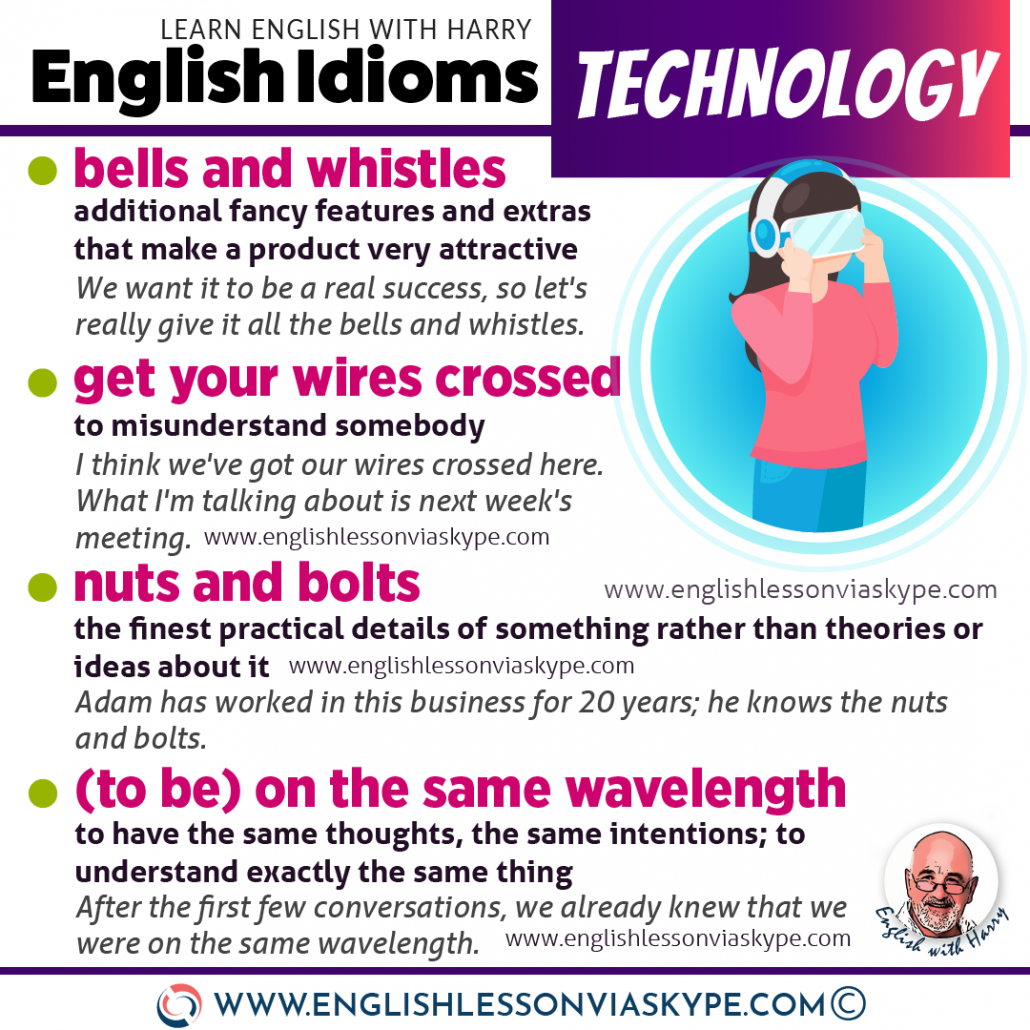 to get your wires crossed

Meaning: to misunderstand somebody; to become confused

If you work with electricity, you have to be very careful. If you get your wires crossed, you put the black wire or the blue wire in the wrong place; it can be quite dangerous.

We got our wires crossed; I thought you were picking Jack up.

The next one is:

nuts and bolts (of something)

Meaning: the finest practical details of something rather than theories or ideas about it

Adam has worked in this business for 20 years; he knows the nuts and bolts.

to be on the same wavelength

It is the opposite of ‘to get your wires crossed’

Meaning: to have the same thoughts, the same intentions; to understand exactly the same thing, to be in agreement with somebody

After the first few brief conversations, we already knew that we were on the same wavelength.

Meaning: a lot of bureaucracy, hidden or unknown reasons that make a particular situation very complicated, difficult and slow

The next idiom is

(all the) bells and whistles

This is the first time that we’ve launched a product in many years. We want it to be a real success; we want to capture the public’s imagination, so let’s really give it all the bells and whistles.

to be right on the button

Meaning: to be exactly right

He confirmed her suspicions; he was right on the button.

to be at the cutting edge

Meaning: to be right there in the lead, at the front

Apple is always at the cutting edge of technology. The company has become a leader in the industry.

make someone or something tick

We need to introduce new people to the company that will help to make the business tick.

So there are the idioms related to technology.

Let me just give them to you one more time:

Hopefully, you enjoyed that. If there is somebody out there that you think will benefit from this English learning podcast, please pass on the details.

I’m always happy to hear from you. Thanks for listening. Join me again soon. 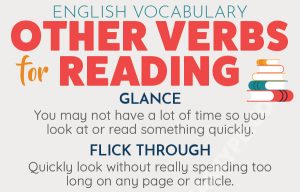 Here you will learn 5 English verbs that you can use instead of READ and 6 book English idioms. Not 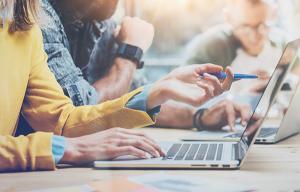 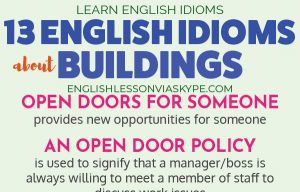 There are more parts to a building than just the walls. Here are some more commonly used English idioms about