Here you will learn English adjectives to describe jobs.

We all think and believe we have difficult jobs whether in the office, in a factory or in our homes. Can you talk about your job in English? How can you describe it?  I hope you find something that summarises your position and you will be able to use it in your spoken or written English. 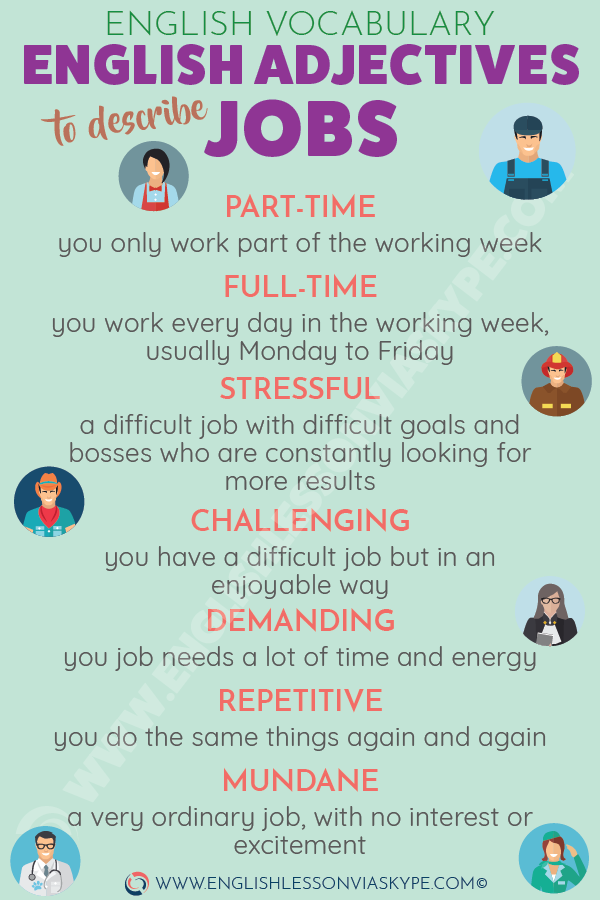 these expressions describe the length of time we will spend at our work either daily or weekly. We all hope to secure a full-time job but for some a part-time job is all they can get or indeed it might be all that they want.  Usually, if you have a part-time job you only work part of the working week. If you have a full-time job you work every day in the working week (usually Monday to Friday).

Ex. Johnny had been looking for a full-time job for six months after he left college. He finally accepted a job in his local enterprise centre which was initially only on a part-time basis, two days per week, but if he proved himself it might increase.

Full-time jobs can also be referred to as permanent (not so easy to be sacked or made redundant) and you usually have a contract of employment (legal document) which offers a lot of protection.

Part-time jobs on the other hand do not have this protection and are often referred to as temporary.

Yes, of course we all have ambitions to earn as much as we can and be valued by our employers for the work we do. If we are very lucky we get an enjoyable rewarding job that is well paid (high income). Well paid is a job where you earn a lot of money.

Ex. Michael had worked for years in a junior management position. He worked hard but did not feel appreciated by his employer. He answered an advertisement on the internet one day and secured the job of his dreams. It was interesting but also well paid much more than he had previously received.

The opposite of a well paid job. We all would like to avoid this situation for ourselves and our family. However, sometimes it is inevitable. In a badly paid job you don’t earn a lot of money.

Ex. Traditionally in the UK nurses and teachers, fire fighters and policemen are often considered to be badly paid in comparison to some people working in Finance or retail or IT.

How to Describe a Job in English?

A very important job where you have a lot of responsibilities.

Ex. Her brother has a really high-powered job at a computer company.

You can also use HIGH-POWERED in relation to people meaning he has a lot of power or influence.

ex. Sam progressed in his career quite a bit along the way, he is now a high-powered executive in a big multional.

A difficult job with difficult goals and bosses who are constantly looking for more results can be described as stressful. You get home form work exhausted and worried and cannot leave your work behind you. You think about it regularly even in your personal time.

Ex. Mary loved her job most of the time, she had always wanted to be a teacher. However, the constant demand from her head teacher for reports, the regular confrontation with badly behaved students meant that she was always worried and stressed. Teaching became a stressful job for her.

Your job is difficult but in enjoyable way. For example, the demands for results and the KPI’s (key performance indicators) are never easy to achieve and they increase annually.

Ex. Martha worked in sales. She had the most successful area in her team. However, every year her targets increased and became more challenging. When the KPI’s were set she spent many weeks wondering whether she could achieve the new goals and the previous year was soon a distant memory (forgotten about).

A job that makes you feel statisfied. There are many ways in which you can define a job as rewarding. A rewarding  job can be measured by the satisfaction you get in simply doing a good job. For example, saving someone’s pet if you work as a Vet, helping a student pass a difficult exam if you are a teacher or building a wonderful kitchen in someone’s home if you are a carpenter.

Ex. Ivan found his job very rewarding. He worked long hours but he took great pleasure from helping to cure an old woman’s sick dog and seeing the happiness in her face when her favourite pet was returned to her. 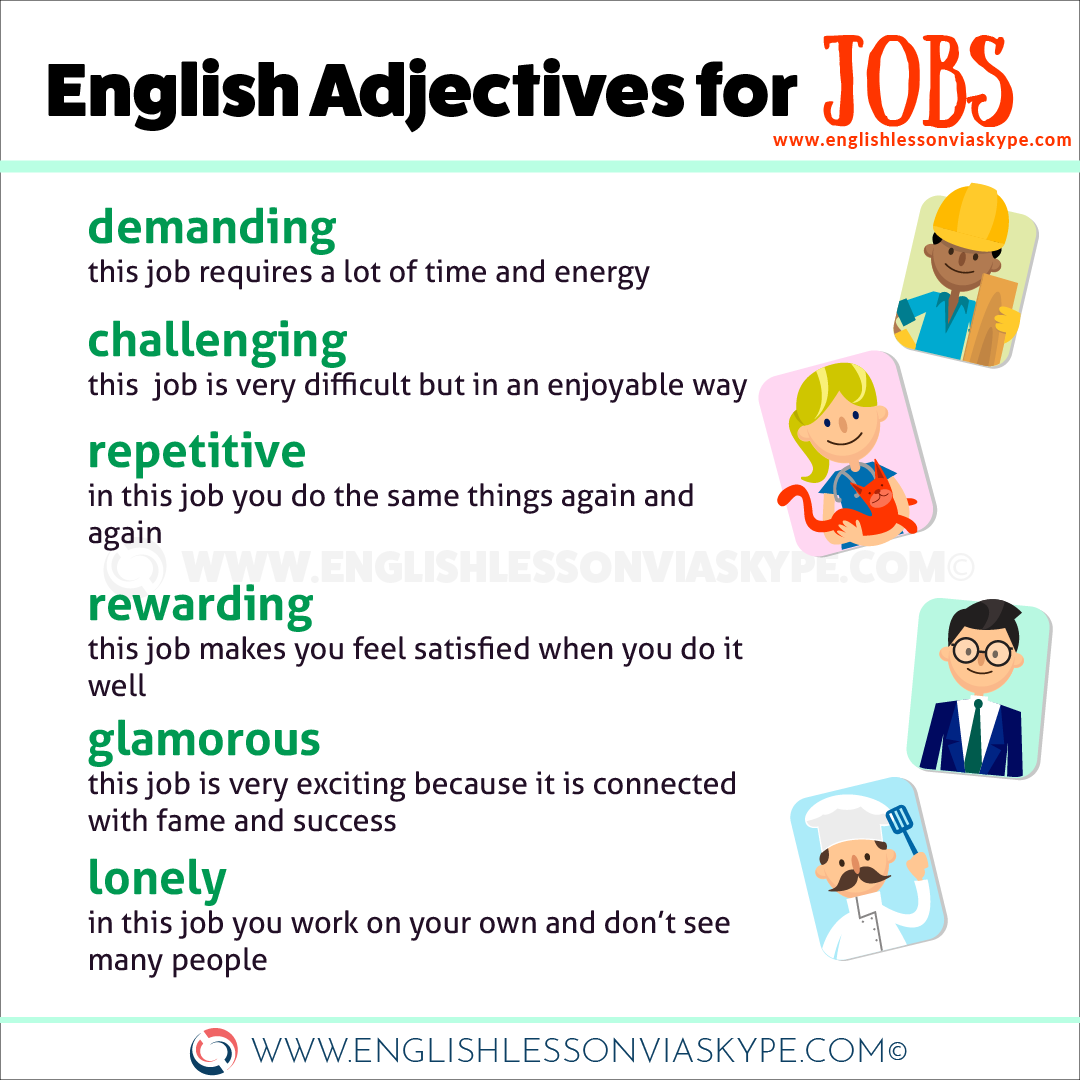 Every day you do the same things again and again, repeat the same tasks. None of us want to use these words to describe our jobs but at times even the most rewarding of jobs have their boring days!

However, if the work is the same on a regular basis then we can definitely describe it as repetitive and if there is no fun or excitement it will certainly be seen as dull (a very boring, depressing) and if this goes on for days weeks and months then the only word to describe it is mundane (very ordinary). But you know we have a saying “someone has to do it!” and it is true even the most repetitive, dull and mundane jobs have to be done by someone.

You job is very exciting because it’s connected with fame and success. What might we describe as a glamorous job? In the past, air hostesses considered glamorous. Nowadays jobs that may now be considered glamorous might include fashion models, travel bloggers, famous youtubers, influencers, beauty consultants and international sports stars such as golfers and tennis players. The glamorous part is reflected in the style of clothes they wear the cities they visit and the people they are surrounded by.

Ex. The life of a modern tennis star is a fast life of tennis tournaments in the worlds’ capital cities, living in the finest hotels and constantly in the public eye. However, while we might see it as all glamour and glitz (style) they may see it as repetitive and perhaps lonely (away from friends or family).

What kind of job do you have?

Intermediate English learners! Here is your chance to master English Grammar Tenses so you can speak English fluently and with confidence, sign up for 3 hour English Grammar Rules Refresher Course. Click on the link to read more and enrol.

10 Ways to Finish an Email in English