Here you will learn 33 English adjectives that describe people and personality.

33 Adjectives that Describe People and Personality 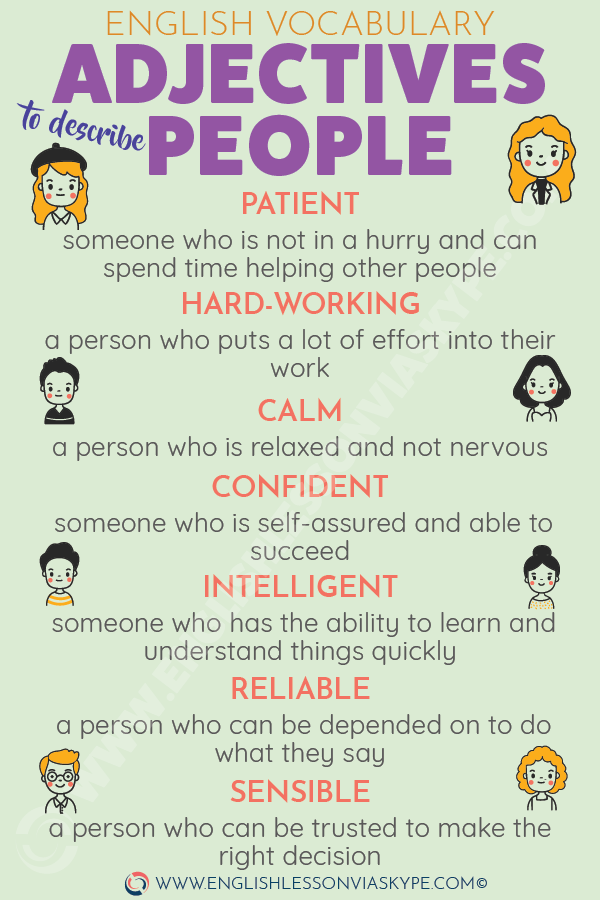 Cathy works as a carer in a home for elderly people. She needs to be patient with the old people she looks after. She must be hard-working, because she has long shifts with only a short break and her duties include lifting and carrying. Cathy is always calm under pressure and can be relied on in an emergency. Cathy’s boss David says she is the ideal person for her job and a great team member.

Steve teaches maths in a secondary school. He is confident about working with large groups of teenagers. Steve is intelligent and able to explain maths in a way his pupils can understand. He is sociable and enjoys organising the end of term party for the other teachers. Steve’s colleagues like having him around.

Rob enjoys swimming and belongs to a local club. He is the fastest swimmer in his county for backstroke. Rob is very competitive and always likes to win at whatever sport he plays. He hopes to get a place in the national swimming team and represent his country at the next championships. Rob’s coach says he always turns up for training sessions and is very reliable.

Lisa is a hairdresser who owns her own business. She is charming to her customers and enjoys helping them to look their best. People like coming to her salon to get their hair cut, because Lisa is a sociable person who loves her work.

1. Patient – someone who is not in a hurry and can spend time helping other people.

2. Hard-working – a person who puts a lot of effort into their work.

3. Calm – a person who is relaxed and not nervous.

4. Confident – someone who is self-assured and able to succeed.

5. Intelligent – someone who has the ability to learn and understand things quickly.

6.Reliable – a person who can be depended on to do what they say.

7. Sensible – a person who can be trusted to make the right decision.

8. Sociable – someone who is friendly and enjoys the company of other people.

9. Competitive – a person who likes to win at games or sports. They may be bad losers.

10. Charming – someone who has an attractive personality that makes people like them.

11. Ambitious – someone who has a strong desire to do well or to be successful.

12. Generous – someone who is happy to give more money, time and help than is usual.

13. Arrogant – someone who thinks that he/she is better than other people.

14. Aggressive – someone who often figths and argues with other people.

15. Cheerful – someone who feels happy.

17. Responsible – someone who is able to act sensibly and make his own decisions.

18. Honest – someone who always tells the truth.

19. Tolerant – someone who is able to accept other people’s ideas even if he/she doesn’t agree with them.

20. Dull – a boring person, someone who has no personality.

22. Down-to-earth – someone who is sensible and realistic in things they say or do.

23. Pretentious – someone who pretends to be very important.

24. Spontaneous – someone who acts in an open and natural way, capable of making decisions without planning.

25. Witty – someone who is very quick thinking and clever with words

26. Flexible – someone who adapts quickly to new situations and doesn’t mind change

27. Ruthless – someone who is determined to get what they want and not caring about others

28. Shrewd – someone who is good at judging people and situations

29. Pushy – someone who tries hard to get what they want, especially in a rude way

30. Conceited – someone who thinks that they are very important, celver, etc

31. Conscientious – someone who takes care in doing things properly and carefully

32. Assertive – someone who behaves confidently in order that people take notice of what they say

33. Diffident – someone who is not confident, a shy person

How would you describe yourself? Or people you like? Try to use adjectives that describe people and personality from this article.

You can also use adjectives to describe physical appearance if you would like to describe how they look like.

FOOD PHRASES AND IDIOMS – HOW TO TALK ABOUT FOOD IN ENGLISH

DIFFERENT WAYS TO SAY NO IN ENGLISH 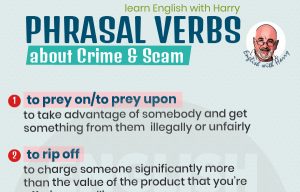 Phrasal Verbs about Crime and Scam

Here you will learn phrasal verbs about crime and scam. We have already reviewed crime and punishment vocabulary, English idioms

why do you need to use some other words for LIKE?  The word LIKE is a very popular word in 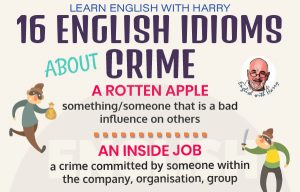