How to use phrasal verbs with come? Here you will learn some of the more common ones. As always, I give you plenty of examples.

It also includes a short video lesson and a quiz to check your understanding! 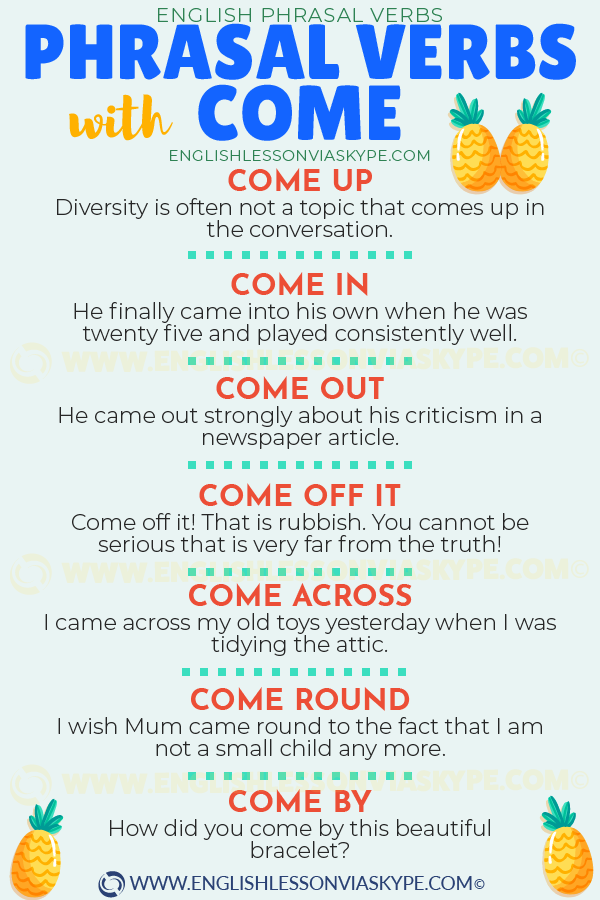 There are many prepositions that are used with the verb COME to create everyday phrasal verbs in English. Here are some English language phrases and expressions which hopefully will help you understand how to use phrasal verbs with COME.

There is an obvious use of this phrasal verb when we ask somebody to perhaps climb the stairs or steps to talk to you. For example, a parent may request a child to come up the stairs and go to bed.

Please come up now! – a stern warning from a mother.

Come up to my office I am on the fourth floor. – an office worker inviting a guest to his office.

However, there are other uses of COME UP.

Diversity is often not a topic that comes up in the conversation.

A few issues cam up during the course of the project.

Can you come up with a suggestion please ? I need to find a solution by tomorrow. – Can you think of a suggestion? Can you suggest something?

Or when we have to cancel a meeting at the last minute we may advise:

The literal meaning is I hope obvious. We ask or welcome some one into our home or office.

Come in! I am delighted to see you.

However, we can also use COME IN in the following ways:

That will come in handy. – Meaning that will be useful.

So if you find a gadget in a shop that opens bottles or cans more efficiently or quickly then we can say:

“Oh look at this it will come in handy for that wine we bought last week.”

When someone matures or becomes more professional or better at his job we can say he has finally come into his own. – He has reached his ability.

He trained to be a professional footballer from the time he was sixteen. However, it took him about eight years to establish himself as a first team player (it took him a while to show his skill level). He finally came into his own when he was twenty five and played consistently well for many games.

Phrasal Verbs with Come and their meanings - Video Lesson

English learning videos are an easy way to improve your English speaking and listening skills.

In this video English lesson you will learn English phrasal verbs with COME and their meanings. With the verb to COME we are going to use prepositions ON, IN, UP, OUT and ABOUT.

How to Use Phrasal Verbs with Come

To come out literally means to leave some place.

He came out of the hotel with his luggage under his arm.

Again, however, there are other meanings of COME OUT.

🔸 1. When a company reveals or launches a new product, we can say they came out with a new product to compete with rest of the market.

Coca-Cola have come out with their first alcoholic drink.

🔸 2. When we disagree with someone’s views strongly we can come out against their opinion.

He was very annoyed that the Government did not do more to fight knife crimes. He came out strongly about his criticism in a newspaper article.

Two million workers came out against the new bill, the whole country was paralysed.

The book came out last month. It was really exciting.

We use this phrase when we do not agree with someone and we wish to tell them that they are wrong or misguided.

Come off it! That is rubbish. You cannot be serious that is very far from the truth!

If someone loses consciousness or is knocked out for a short while they eventually regain consciousness and we can say they have come to or they are awake.

The man had a serious operation and the doctor had to give him a strong anaesthetic . He eventually came to approximately 2 hours after the operation. (can also say to come round with the exact same meaning)

So come on!! If you are still unsure how to use phrasal verbs with COME, try them out and see how you get on!

🔸 1. to come to = to regain consciousness

I wish Mum came round to the fact that I am not a small child any more.

Come off it - British slang meaning 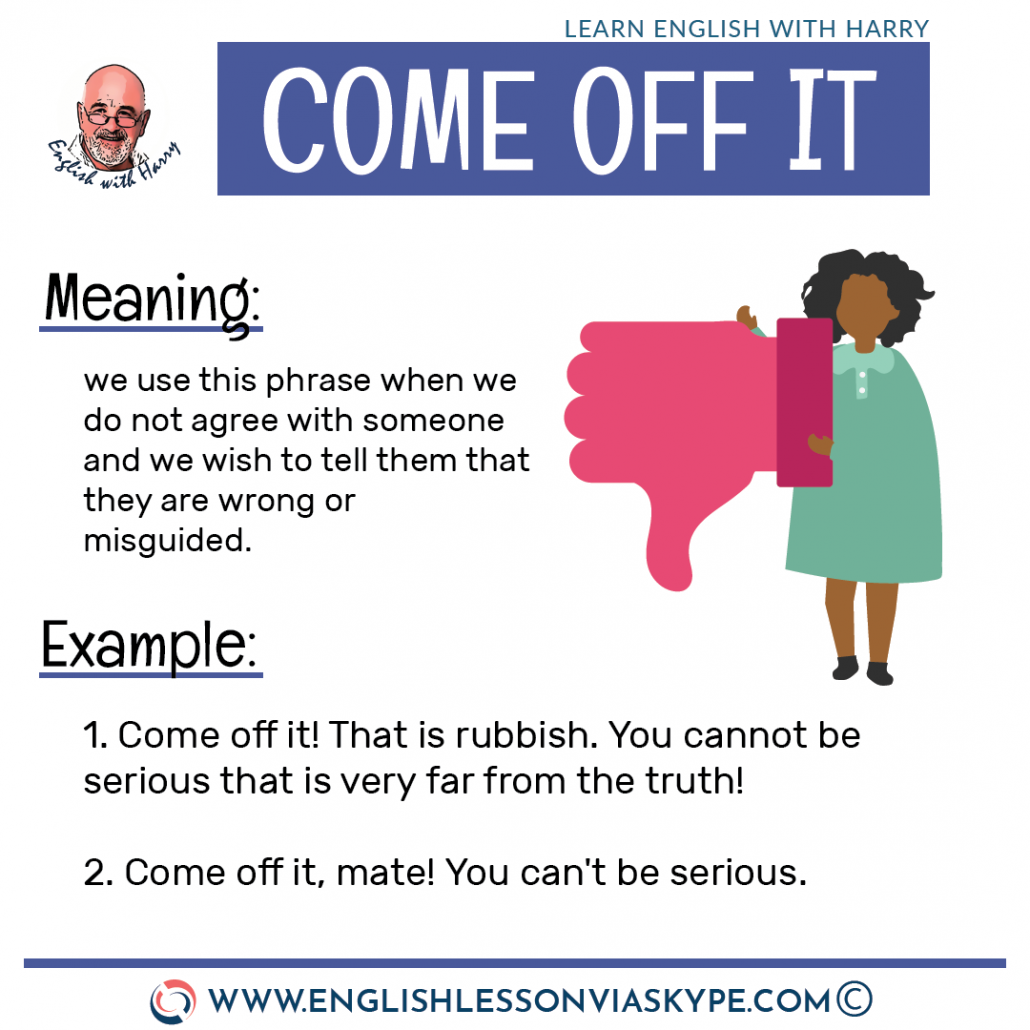 How to Use Phrasal Verbs with Come

To meet, find by chance.

I came across my old toys yesterday when I was tidying the attic.

Peter’s family recently came into millions of pounds thanks to his late father’s investment in a tech startup.

How did you come by this beautiful bracelet?

🔸 2. To make a quick visit to someone (North American)

My friends came by this summer.

Paula came over to my house for a conversation.

So come on!! If you are still unsure how to use phrasal verbs with COME, try them out and see how you get on!!

Scroll down to complete an interactive quiz.

For more information on English Phrasal Verbs, English expressions and English Grammar Rules, check out the links below:

Asking and Giving Permission in English

How to use INTO and ONTO in English?

This multi-choice quiz will help you learn phrasal verbs with COME.