So it can be used in many different situations.

We can talk about time or periods of time, like in a month, uh, or in a particular month, like in December or in January, whatever it might be at the moment where in September just and we’re coming into October or it can be about a specific thing like a space.

Or you might just be in your mind, you’re just thinking about it and it doesn’t really exist.

Okay. So I’ve got lots of that, these options for you and I go through them as I usually do one by one and I’d give you some examples to help you. And these are really good because I’ve selected these specifically for those who are practising your written skills. They can be used in writing.

You know, we have to practice our oral skills cause that’s important and it’s about the communication. But in today’s world, you know, we’re texting, we’re sending SMSs . We’re using Whatsapp, emails, whatever it might be. So we need to really practise our written English as well.

So we’re going to go through these, as I said one by one with hopefully some good examples for you.

Don't keep this to yourself, tell the world

So the first one is IN ADDITION TO

Usually in addition to is followed by the -ING format of the verb.

In addition to writing, I would also like you to concentrate on something else.

In addition to working for me, you’re also going to have to report to my assistant.

It is quite formal and also when we’re talking to people in spoken English, we might not always use it. But as I said to you, very important in your written English because we tend to be a little bit more formal when we’re writing.

The next one again is a little bit formal. And again very specific for you practising your written English – IN ANSWER TO.

Well, in answer to your query of such and such a date.

In answer to the letter you sent me last week …

So it is very, very formal. So in answer to followed then with a reference to whatever the particular question that was raised. And the person in answer to is going hopefully to give you that particular answer.

And the next one is IN ANY CASE

In any case, not necessarily specifically for writing. So somebody will use this in the verbal communication with you. In any case usually means, well, I’ve told you about that, but this is what I think.

And the next one, short IN BRIEF.

In brief means, well, let me just summarize something. So at the end of a meeting, you have the people sitting around the table and you say, well, look in brief, this is what we need to do.

So that’s in brief, keep something very short as opposed to the next one, which is IN DETAIL.

So if you wanted to talk to somebody but in detail, then you go through it step by step, line by line. So they make sure that you make sure that they understand everything.

So you want to go through those things in detail, in a lot of detail.

So in brief, short, compact. In detail, a lot more.

And before I move on, just when you’re using in detail, make sure that it is the single in detail.

– Tell me everything about it. What does it look like?

– Well, tell me the details, the price, the mileage, et cetera.

But when you’re talking about them and meeting in detail, means step by step. 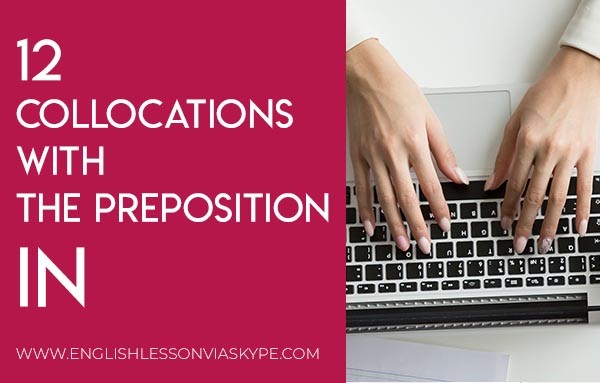 We continue learning English collocations with the preposition in. So the next one I have for you is IN EFFECT.

And in effect means really?

What it means is you’ll have to go back to that particular client and spell it out to him again. So really this is what I want you to do. Really. This is what it means. So in effect, and the next one is quite common.

I’m sure you’ve all heard of it IN FACT.

And when we talk about in fact, we mean actually, yeah.

In fact, what I mean is this…

And the next one is IN GENERAL.

In general means overall. We’re not talking about something specific.

We’re talking about something a little bit more generalistic.

It’s not the same.

Everybody in the UK is heavier than everyone in Italy, but in general.

And the next one is a really good one to use IN MODERATION.

The next one, we have two prepositions that we can use here IN ORDER OF, or IN ORDER TO.

In order of, for example, in order of importance, so you rank things. What’s the most important?

In order to we can use, when we say, for example:

In order to speed up administration, you no longer have to complete the form in triplicate.

As I said before, in order of whatever it might be.

Earlier on we spoke about in general.

In general, which you said something not so specific. Now we have another one IN PARTICULAR.

This is the exact opposite. So when you want to be really specific, you refer to something in particular.

In particular, your second paragraph on the first page where you mentioned….

Well in theory, yeah you’re right. But it never works that way.

Oh, in theory this is what we meant. But in reality we do it another way.

Thanks for listening and that’s it for today. Collocations with the preposition IN.

If you want to join me, you can get me on www.englishlessonviaskype.com

When you get there, you’ll find a link to our wonderful Easy Peasy English Club, which is a great way for you to:

So join me again soon.

10 Real Tips for improving your English

English Expressions with the Word Rock