Here you will learn interesting phrasal verbs. I’ve taken them randomly, they’re not very normal phrasal verbs. So hopefully you’ll understand them and find a use for them in your English conversation.

PUT IT DOWN TO

Meaning: to blame something or to think that something happened due to a particular reason 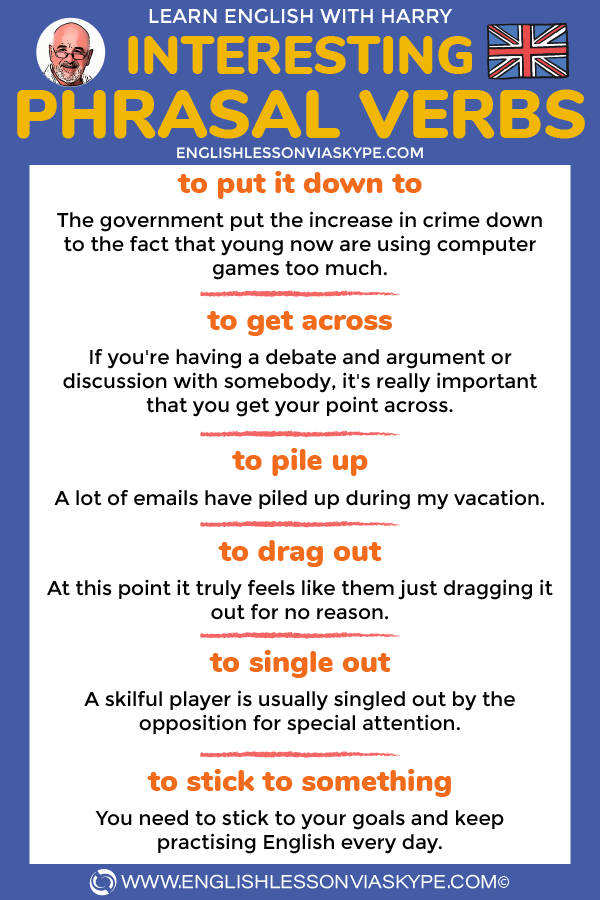 Don't keep this to yourself, tell the world!

It’s a multi part phrasal verb, and we can use this in many ways. For example,if I am suffering from a bad cold or sore throat or generally don’t feel well. And somebody had said:

🧒 How did you get the cold?

Meaning I will blame or that’s my excuse.

We can also use PUT IT DOWN TO if somebody is in a bad mood perhaps, and when you’re talking to them, they get a little bit snappy, meaning they give you a very gruff or a sharp response. And then they say:

So again, they are blaming or attributing their bad manners or little bit of a aggressiveness and their vice, they’re putting it down to the fact that they have to make an important presentation in the next few days.

The government put the increase in crime down to the fact that young now are using computer games too much.

The next phrasal verb is to SINGLE OUT

Meaning: to select or to pick someone or something particularly

For example, in school, the students are all pretty good. They’re getting good marks. But one particular student has done really, really well consistently. So the teachers single out this student for a special merit award.

You’ve all done really well, but Mary Smith has been singled out to receive an award as the person who has gone beyond what they needed to do and has performed exceptionally well in all subjects.

You can use single out phrasal verb with a positive or with a negative meaning.

In the above example I gave you about school, we’re using it in a positive way.

Also in school you might find some boy or girl is a little bit different from the other children. They get picked on or bullied, which nobody likes to see happening.

So they were singled out for some attention by other students because they are different.

We could also use single out phrasal verb in a sporting context.

For example, you have a very, very skilful player on one team. Such a player is usually singled out by the opposition for special attention.

The next phrasal verb is TO STICK TO SOMETHING.

Meaning: to continue doing something that you promised or decided to do

Well, of course we can use this in the literal context when we are cooking and you forget to put enough on oil or something in the pan and do your meat or whatever you’re cooking will stick to the pan and you’re have to scrape it off.

If you’re playing a game of cards, poker, perhaps, you decide to stick to the hand that you have, the cards that you’ve got, you don’t want to change any of them because you think you’ve got a good hand and therefore you’ve got a good chance of winning.

Or you can say, I’ll stick to my decision.

So here is how you can use stick to something in a sentence:

– What are you going to do at the weekend?

– Well, I was going to just have a quiet night in. Why, what are you suggesting?

– Well, you know, with the us are thinking of going for a few beers and then perhaps to a nightclub.

– No, I think I’ll stick to my original idea. The quiet nights sounds a little better. I’ve got to get up for work tomorrow.

And then the final phrasal verb I have in this particular podcast is TO GET ACROSS.

Meaning: make your point to so that somebody understands where you’re coming from

If you want to use it metaphorically to get across, we usually refer to points or information. To get across your point.

If you’re having a debate and argument or discussion with somebody, it’s really important that you get your point across.

So to get your point across a means to make your point to so that somebody understands where you’re coming from and perhaps helps you to win that argument or discussion. Or you might like to get across to somebody that you’re annoyed.

So you know, you stand up and you ask a question and you say to whoever’s in charge of the meeting or eh, somebody in authority:

I’d like to get across to you how annoyed I am about the situation in our streets.

So to get across your point means to make sure the other person listening to you understands exactly what you’re trying to say and the reason why you’re making that point. Okay.

For more information on English collocations, English idioms and English grammar rules, check out the links below:

Other ways to say OKAY in English

11 English collocations with ALL

Phrasal Verbs with PUT and Their Meanings

English Phrasal Verbs with Take with Meanings and Examples