Here you will learn 8 English idioms related to habits with meanings and examples.

Nip in the bud, old habits die hard and kick the habit meaning. 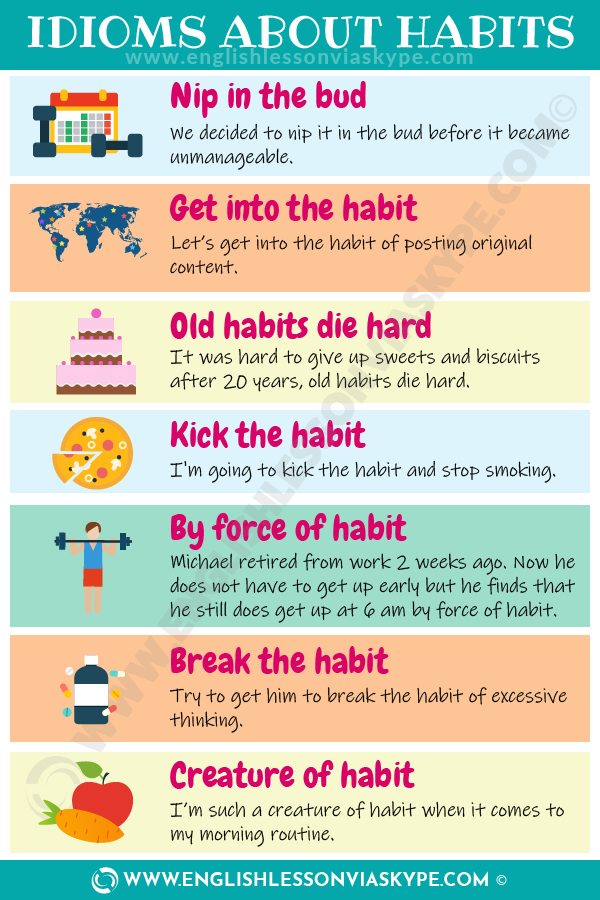 We all have habits. Habits are what we do everyday. We get up at the same time. We eat the same cereal. We read the same newspaper, every day. That is a habit. Let’s look at some English idioms related to habits. Good habits are acceptable although sometimes a little strange (like standing on your head before having breakfast) but bad habits are usually socially unacceptable: smoking in public places or picking your nose!!

This is often used to define all of us. Everyone has habits. Some good and some bad but we all have them and therefore we can all be described as being creatures of habit, meaning we do the same things in the same way.

I am such a creature of habit when it comes to my morning routine.

Try and get him to stop whistling in the house, it is bad luck. Try to get him to break the habit.

Just do it! Try to break the habit of excessive thinking.

by force of habit

Michael retired from work 2 weeks ago. He used to get up every day at 6 am to get ready for work. Now he does not have to but he finds that he still does get up at 6 am by force of habit. It will take a while to stop. 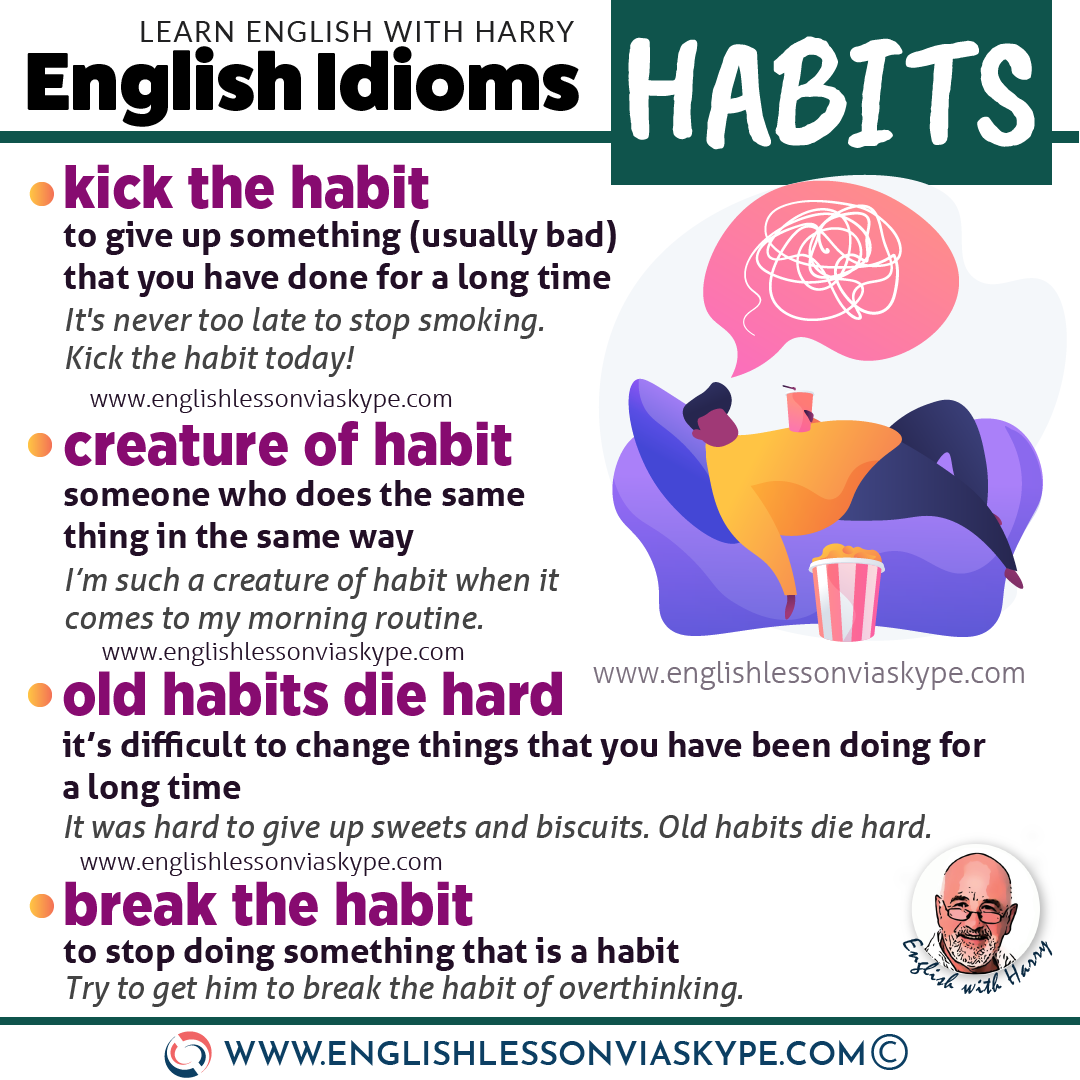 why break the habit of a lifetime?

This is a rhetorical question. (Something we ask ourselves not expecting an answer of course).

John enjoyed a glass of wine every evening when he came home from the office. His doctor told him he should only drink 2/3 times each week. However, he still poured his glass of wine each evening because he enjoyed it. Why break the habit of a lifetime he thought!

Give up something (usually bad) that you have done for a long time.

We are always encouraged to stop bad habits particularly smoking and habits that impact on our health. Advertising against smoking is usually very forceful and strong.

It is hard to stop doing something that someone has been doing for ages.

It was hard for Mary to give up sweets and biscuits after eating them every day for twenty years. Old habits die hard!

NIP IN THE BUD

When you want to stop a habit from forming before it gets too serious we use this expression “nip it in the bud”. It means to stop it as soon as you notice it becoming a habit otherwise it will be difficult to stop.

His mother noticed that he was beginning to get up later and later for school every day. She decided to nip it in the bud as soon as possible and bought him an extra alarm clock so his lateness would not become a habit.

We decided to nip it in the bud before it became unmanageable.

head him off at the pass

When you want to stop somebody doing something you do not agree with you decide to intervene (stop him) and plan something that will make him stop before he makes a mistake.

David was going to fire our secretary because he thought we did not need her. In fact, she was essential as she was well-liked by all our clients and often they did business with us because of the way she treated them. We decided to head him off at the pass and get our clients to write to David telling him how important she was. He could not fire her after this.

get into the habit

to begin to do something regularly

Let’s get into the habit of posting original content.

Let’s get into the habit of saying positive things.

So here are my 8 English idioms related to habits:

Let’s make a habit of learning English!  When you are finished learning idioms related to habits, here are some more English idioms for you to remember.

How to speak English fluently and confidently? The answer is very simple – improve your English vocabulary and master English grammar. For more information on useful English Idioms, check out the following links:

Exercises on English idiomatic expressions can be found here