Today let’s talk about English homographs and in particular English expressions and idioms with Wind.

There are over 160 homographs in the English language.

One of them, for example, is Wind [ˈwɪnd] (pronounced wih-nd) – the wind is blowing

Wind [ˈwaɪnd] (pronounced wy-nd) – the road winds around the mountain.

The same word the same spelling but with two distinct meanings and separate pronunciations.

Expressions and Idioms with Wind

Here we take a closer look at some common expressions and idioms with Wind.

THE WIND OF CHANGE

this means that something is happening after a long time

Example: The Government has been a centre part for several decades. However, the signs now are that a more right-wing party will take control. I can feel the wind of change.

HE IS A BIT WINDY

He is not very confident and a bit weak. He will not take up the challenge.

Example: He is afraid of heights. He will not climb that mountain, he is a bit windy.

BLOWING IN THE WIND

there are rumours about that something will change

Example: People are talking about it. It is in the air, it is blowing in the wind.

IT IS AN ILL WIND

if something bad happens,
normally there’s something good for somebody else

We can use this phrase when someone can benefit from another’s misfortune, thereby a positive outcome occurs. Good for some.

It’s an ill wind that blows nobody any good. – the first use of this phrase was recorded in 1546.

Example: I made lots of mistakes in my exam but I learnt a lot by making those mistakes, it’s an ill wind.

A STRAW IN THE WIND

an incident, event, statement, etc that indicates how the future might develop

Example: People’s reaction can be regarded as a straw in the wind. There are definitely some major changes ahead.

TO WIND SOMEONE UP [ˈwaɪnd]

We use this expression when we want to trick/fool someone. If we know that a friend or colleague gets annoyed easily by something we wind him up.

Example: It was only when we were leaving the club that we told him we were only winding him up.

to slow down or to begin to stop.

Example: It is a holiday this weekend so people will begin to wind down their work on Friday.

When the old clocks stopped working we had a special key we used to wind the clock to get it to work again.

Example: ‘Wind the clock, please,’ were Gramdma’s first words when we entered the house. 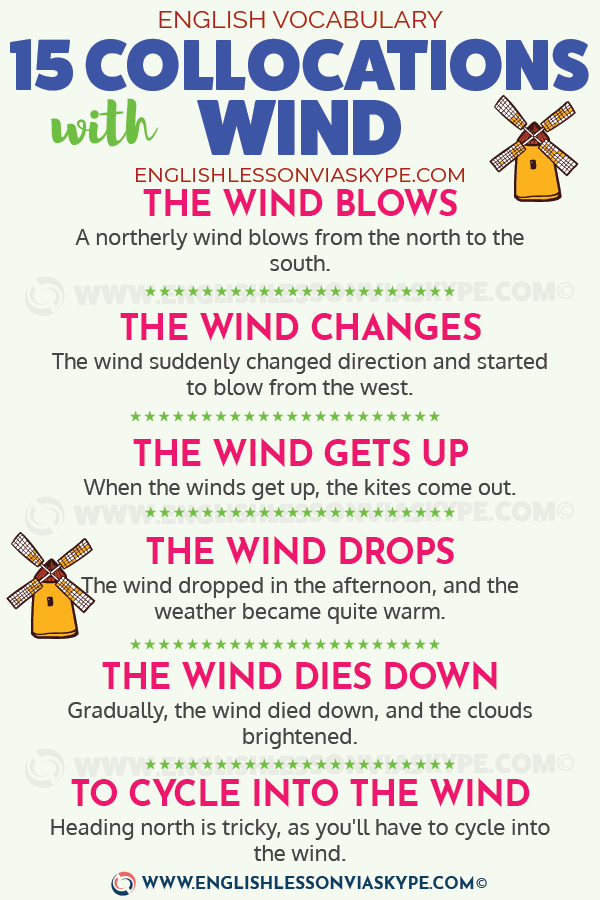 Don't keep it to yourself, tell the world:

GET THE WIND UP

Example: He got the wind up when he saw theye were after him.

TAKE THE WIND OUT OF SOMEONE’S SAILS

to put a sudden end to someone’s over-confidence

Example: One simple question took the wind out of his sails.

to move very fast and smoothly (a car, a fast athlete, etc)

Example: A northerly wind blows from the north to the south.

Example: The wind suddenly changed direction and started to blow from the west.

THE WIND GETS UP

Example: When the winds get up, the kites come out.

Example: The wind dropped in the afternoon, and the weather became quite warm.

THE WIND DIES DOWN

Example: Gradually, the wind died down, and the clouds brightened.

Example: You could hear the wind whistles through through the small gaps in the door.

TO CYCLE INTO THE WIND

Example: Heading north is tricky, as you’ll have to cycle into the wind.

TO SAIL INTO THE WIND

Example: The ferry was 2 hours late, it was very difficult to sail into the wind.

TO SHELTER FROM THE WIND

Example: I’m getting cold, let’s shelter form the wind in that shop.

Example: Airports are currently closed due to expected strong winds at midday.

Example: The icy wind cut right through me.

Example: A light wind is the most favourable for fishing.

A BREATH OF WIND

Example: It absolutlely still. There wasn’t a breath of wind. 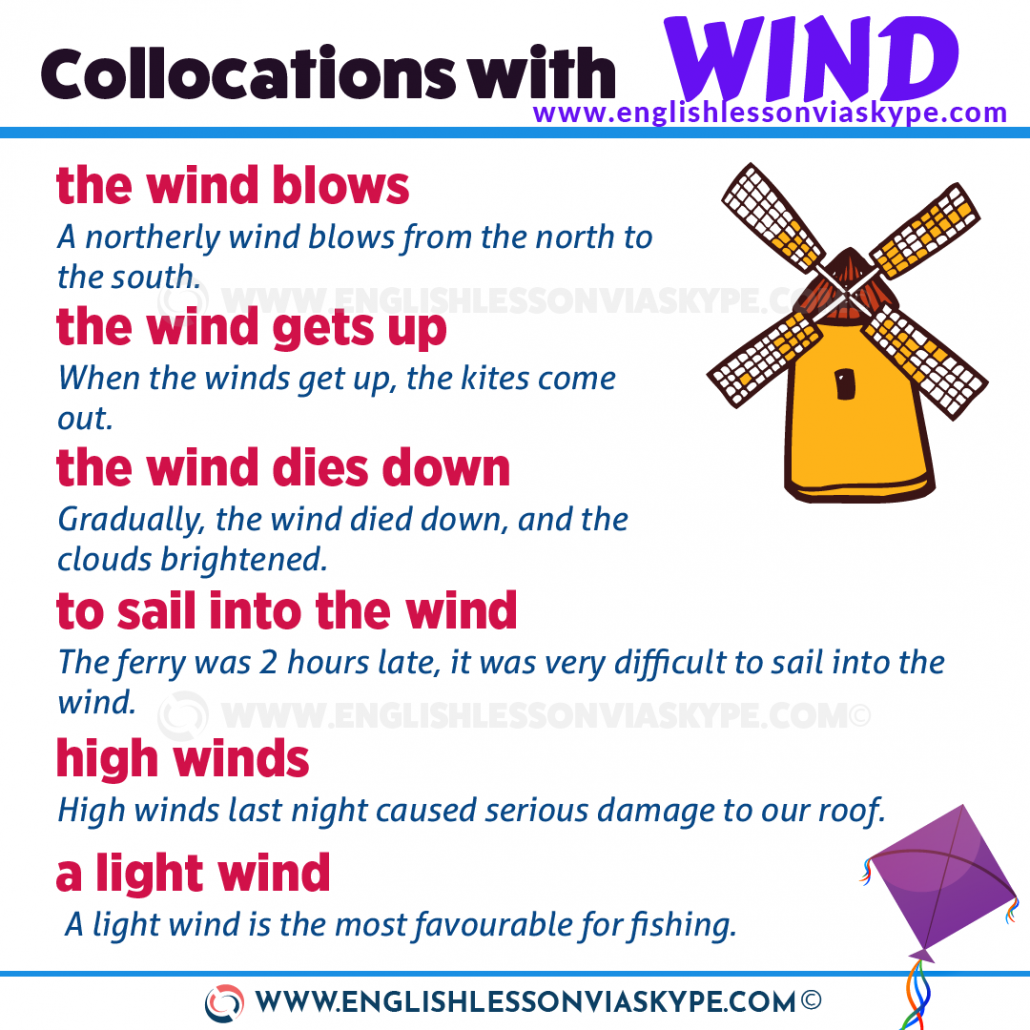 Phrasal Verbs with Around

English Expressions with GET