Learn English vocabulary related to movies and entertainment. We will also focus on different types of movies in English and English adjectives for describing movies. british council learn english

As a bonus, you will also learn English movie idioms.

The show must go on, to run the show, to steal the show.

Improve your English vocabulary, practice and be able to talk about the latest or your favourite movies in English. 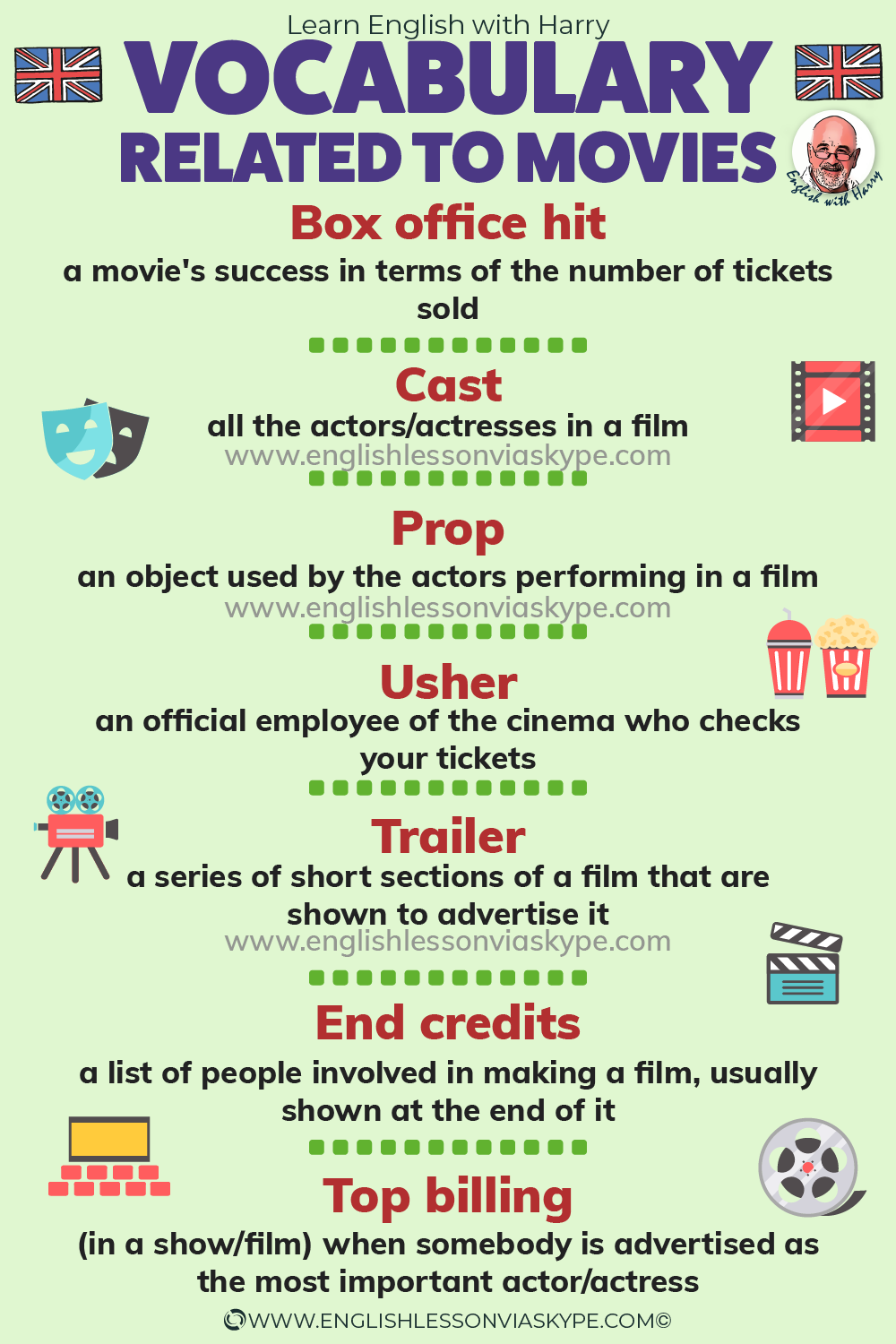 Despite all the home entertainment we can enjoy these days and in spite of all the many other distractions, going to the movies is still as enjoyable as ever. So let’s look at English vocabulary related to movies and learn some English words and phrases connected with movies.

And at the end, you will also find English movie idioms.

What verb should we use to describe going to the movies?

Well, simply going to is sufficient as it sums up the exact action of leaving your home and travelling to the cinema to watch whatever is on.

We can of course as easily say

to see a movie or to watch a movie

I am going to see a movie with my friends, would you like to come along?

We are watching that old movie you like will you sit down and join us?

What movie are we watching tonight then? I saw that movie last week it is great.

If you have ever been invited to a film premiere, then you have had an amazing experience.

to book the seats /tickets – to reserve tickets

to give thumbs up – to write positive reviews

to pan something – to severely criticise something

cast –  all the actors/actresses in a film

A film premiere often includes members of the cast appearing to sign autographs and have their photos taken for the daily papers.

usher – an official employee of the cinema who checks your tickets 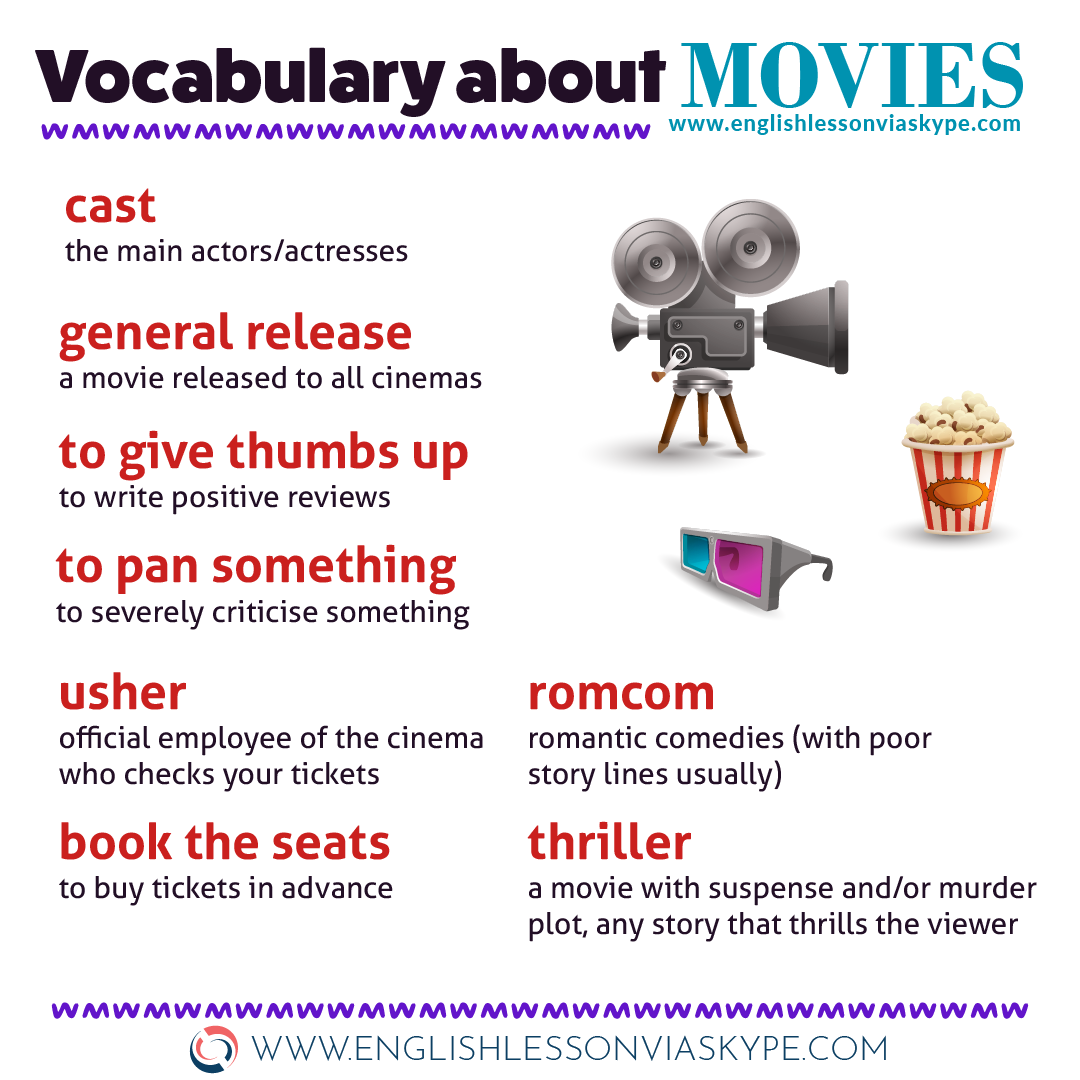 opening scene – the first part of a film

remake – a modern version of an existing film

end credits – a list of people involved in making a film, usually shown at the end of it

soundtrack – the music that goes with a film

I don’t like watching films that have been dubbed, I prefer to hear the actors’ own voices.

Subtitles for this film are available in French, Italian, and Spanish.

to bring out – to release a film, music album or book

the leading part – the main role

prop – an object used by the actors performing in a film

supporting cast – the other actors/actresses apart from the leading ones

sequel – a film (book, play) that continues the story of a previous version

cameo /ˈkæm.i.əʊ/ –  a brief appearance of a famous actor in a film

absorbing – very interesting, keeps your attention for a long time

action-packed – with a lot of thrilling incidents

controversial – causing a lot of discussions or disagreement

intriguing /ɪnˈtriːgɪŋ/ – very interesting in a way that arouses your curiosity 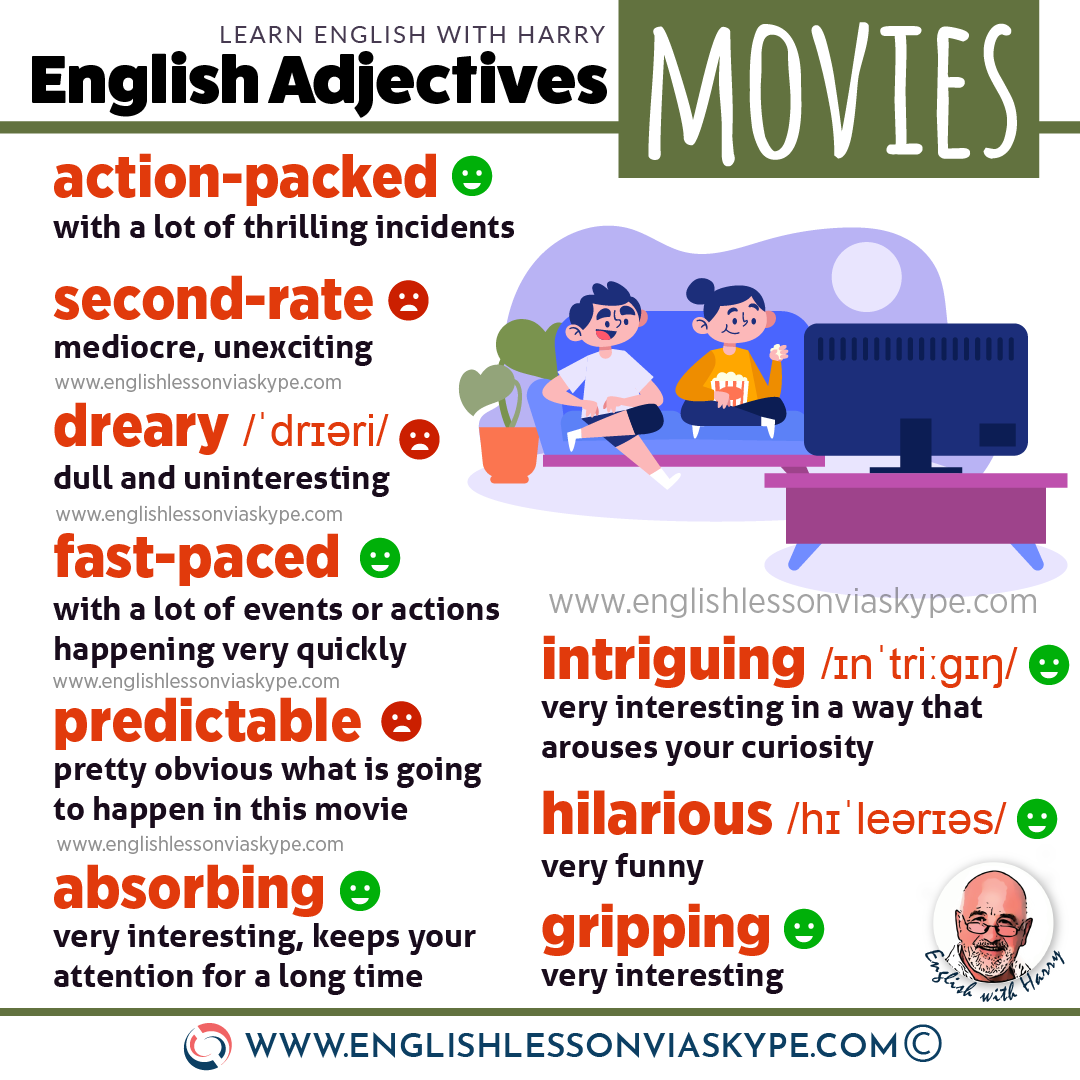 predictable – pretty obvious what is going to happen in each scene

riveting /ˈrɪvɪtɪŋ/ – keeps you glued to the screen

second-rate – mediocre, unexciting, nothing to write home about

thought-provoking – stimulating you to think about something, often something you haven’t thought of before

underrated – much better than what people believe

different types of movies in English

So what type of movies do you like? This is usually where the problem starts. Which film you go to depends on whether you can reach an agreement as to the type (genre) of movie that most people will enjoy. There are many genres.

comedy – a film that tries to make people laugh

biopic – a biographical movie about a real person (living or dead)

documentary – a film that shows a true story, often shown on television

period film – a movie about lives in the previous centuries, typically in the 19th century

Here are some phrases related to going to the movies that you may find useful:

How long is it running for? – How many weeks will it be on for

Who’s in it?  – Who are the key actors/actresses

What’s it about? – What genre or type of film is it 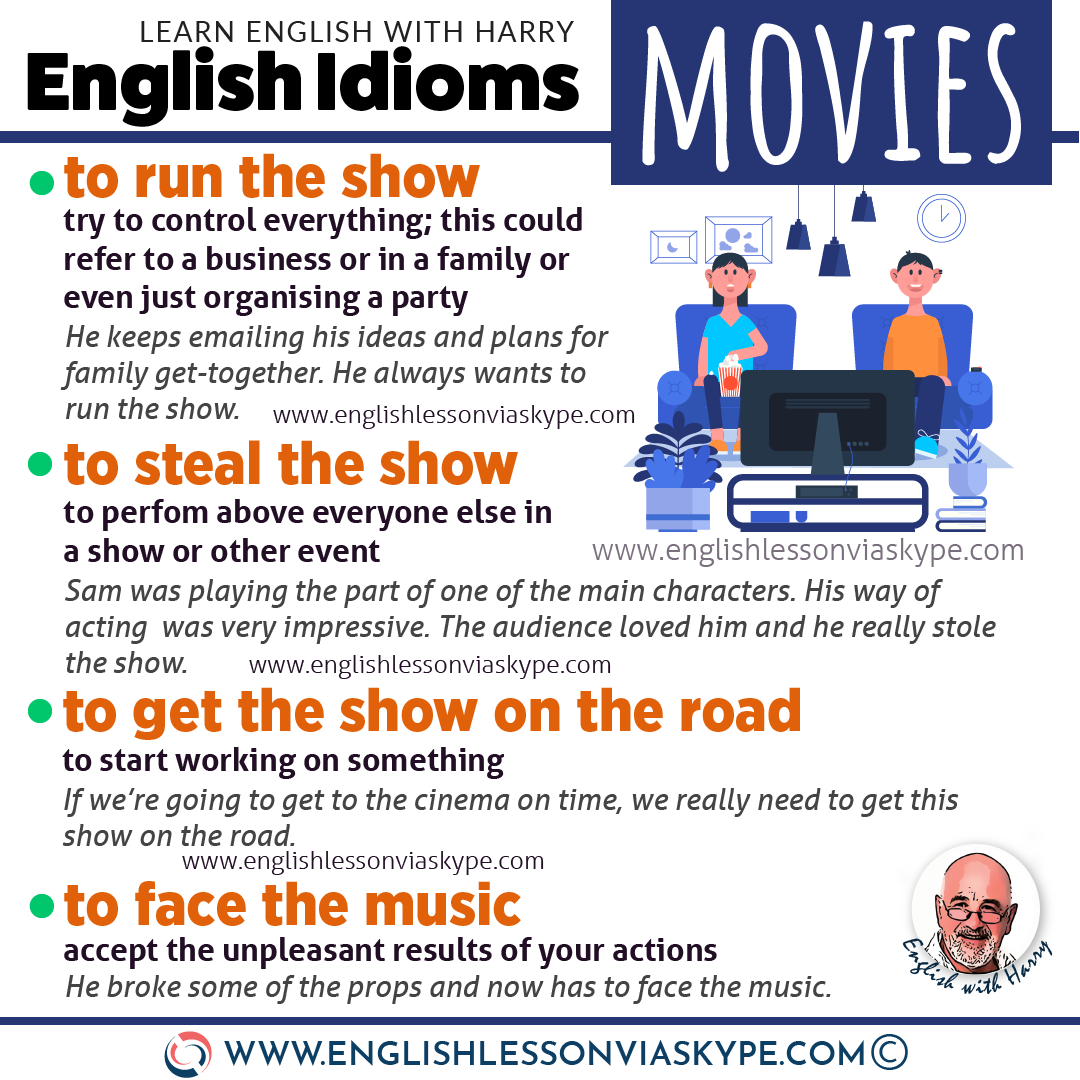 And here are some English idioms related to movies:

the show must go on

Of course, show refers to the movie or theatre performance and even if there was a tragedy or serious event whilst filming the directors and actors in one voice would cry “the show must go on”.

So today in our ordinary lives we use this phrase for the same reason.

Michael had spent weeks organising the business presentation but when the day arrived he had terrible flu and wasn’t sure whether he good present it properly. However, his boss told him to take some tablets and do it as it was very important. “The show must go on”.

to run the show

David and Mary were annoyed with Stephen, he kept emailing them with new ideas and plans for the family get-together at Christmas. “Who does he think he is? He always wants to run the show.”

to steal the show

When someone in the cast or in a performance (amateur or professional) performs above everyone else we usually say that they stole the show.

Sam was playing the part of one of the main characters. His voice and mannerisms (way of acting) was very impressive. The audience loved him and he really stole the show.

to get the show on the road

This refers to getting something started.

Peter and Mary were planning a trip away with their 3 children. Once everything was ready, packed in the car and everyone seated, Mary said: “Right, let’s get the show on the road.”

to face the music

To accept the unpleasant results of your actions.

One of the technical team members broke some of the props and now has to face the music.

If you want to improve your English, please check out online English classes for you and your family and friends. And don’t forget about English learning courses that start from only €7.99. 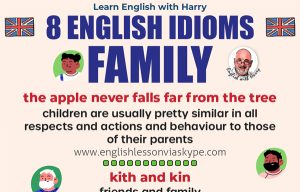 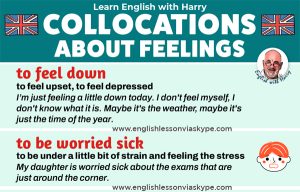 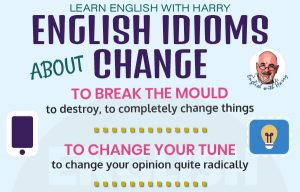 Here you will learn 7 English idioms about change. To stick to your guns meaning. To reinvent the wheel meaning