If you have ever wanted to tell someone to go away, this post is for you. Here you will learn 10 other ways to say go away in English.

Usually, we use go away when you’re busy and someone is annoying you. You can also use it in a joking way.

Just be very very careful how you use some of the expressions below as they might offend and upset people.

Welcome back to my English lessons. Today we’re going to give you some more expressions. And what I’m going to do today is show you different ways to say one particular expression.

The expression that I have for you today is GO AWAY

I’m going to give you 10 ways in which you can tell people to go away. Well, nine plus go away makes ten.

When we say GO AWAY we really want somebody to leave us alone. We want to be on our own, we’ve got work to do or perhaps we just want to sit in a dark room pull down the shades and fall asleep.

So first one GET LOST

This can be a little bit rude depending on how you say it.

GET LOST – if you get a bit aggressive or have a little bit of an anger in your voice, somebody really knows when you say that you want to be left alone.

Or you might just say it in a playful way GET LOST. Just leave me.

So GET LOST doesn’t mean you want somebody to run away and never be seen again. But you’re saying it in such a way is ‘I don’t want to see you for the moment so just get lost.’

I’d want to be on my own so I won’t have to see or speak to anybody.

Our second option is LEAVE ME ALONE

So any time that we want to be left alone then we just say LEAVE ME ALONE.

You can say it with a bit of emphasis because that might sound that you’re a little bit angry:

Leave me alone, I’m tired, I want to go to bed

Leave me alone, I have lots of work to do 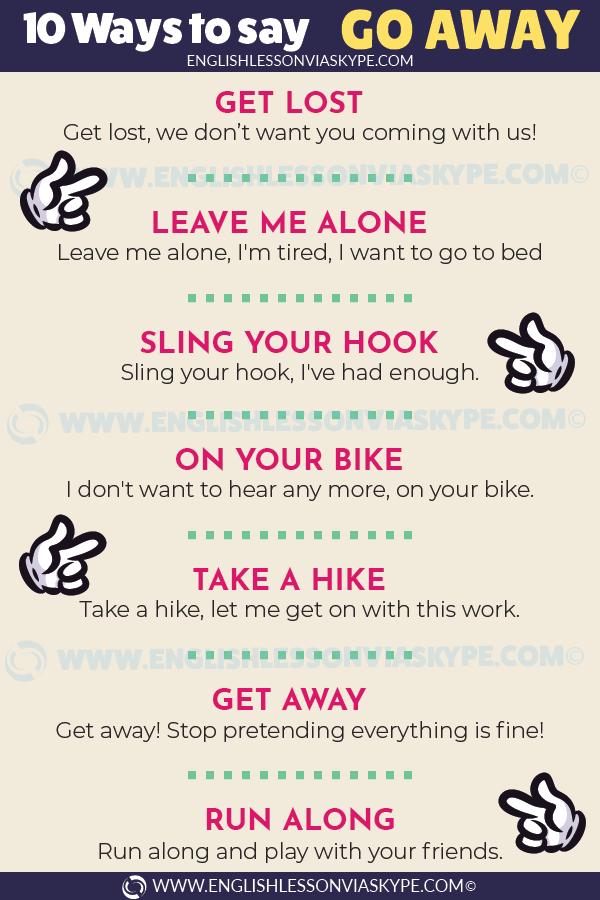 Third one is GET AWAY

At the beginning we had go away. So here’s slightly similar GET AWAY means I don’t want to see you right now, you’ve really upset me today.

Maybe one of the kids is bisbehaving and annoying you.

Get away, go to your room!

Get away! Stop pretending everything is fine!

Here’s one of these very informal expressions.

When I get on my bike, I want to cycle and just go ahead and enjoy the fresh air.

But when we say to somebody ON YOUR BIKE we’re in a sort of funny way asking them to leave and just go away.

On your bike, I’ve had enough

I don’t want to hear any more, on your bike

Just go away and leave me alone.

When somebody stopped working many many years ago in the shipyards they used to have this big big hook. And they used to use the hook to grab on the bags and carry them away. When they sling their hook they put it over the shoulder in a sling and they disappear.

So TO SLING YOUR HOOK means to stop and just go away.

As I said, it’s a really informal expression. It’s an idiomatic phrase and just be careful how you use it.

Again you’re using it in a joking way:

Sling your hook, I’ve had enough

This is something that a parent would definitely say to the child. I don’t to be offensive in any way. So the child is under their feet, he/she is in the kitchen when they’re trying to cook. Or he/she’s getting in the way during the holidays.

Run along and play with your friends.

Run along and take the dog for a walk

Run along and get to school, you’re going to be late.

Another way of saying go away is PUSH OFF

Here’s when we’re getting a little bit rude. Push off doesn’t mean to push somebody it means go away. It’s very British English.

Push off, I want to be on my own

Hike is when we go and we’ll put our backpack on and we put our walking boots on and we would go off up the hills or the mountains to get some fresh air. So hiking is really really popular idea.

When you ask somebody to take a hike it means you want them to go away for a long time.

Take a hike, let me get on with this work

And then finally, this is the one that’s a little bit rude that I warned you about is PISS OFF

When we’re really annoyed with somebody we can say piss off. But be very very careful who you use this with because they might get upset.

It is slightly rude and vulgar.

It’s not the worst thing you can say to them but it’s not far from it.

Piss off and leave me alone, it I’ve had enough

Just piss off and take the kids, get out of the house

So these are 10 other ways to say GO AWAY in English. As I said:

but be careful how you use it.

As always, remember to subscribe to my channel and join me on www.englishlessonviaskype.com and I’ll catch up with you very soon. 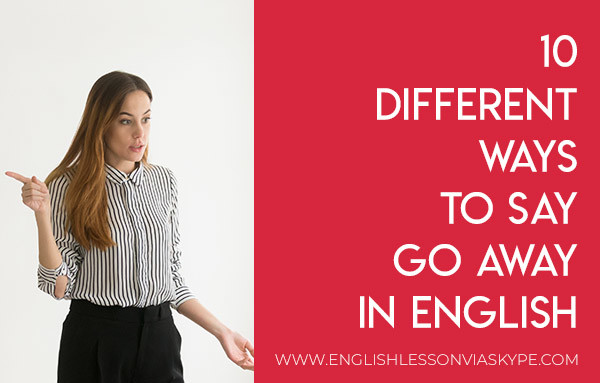 Difference between ENOUGH and TOO

Phrasal Verbs with PUT and their meanings

English Vocabulary for Socialising with Friends